It was a big surprise to receive an invite via our Papal Nuncio, Archbishop Charles Brown, to meet Pope Francis with Rachel Moran on 9 September 2015. 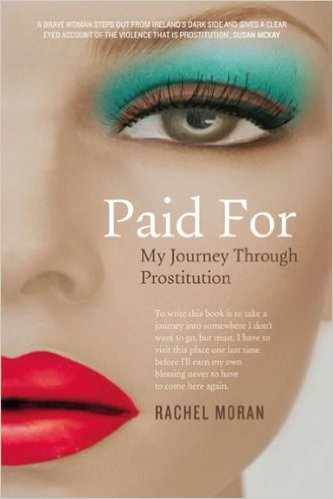 We had worked hard to arrange for Rachel to meet Francis, prior to Amnesty International (AI) voting on their resolution to ‘decriminalise’ all those involved in the ‘sex industry’. This means that pimps, johns or punters and brothel keepers would all operate legally! Tragically AI during their bi-annual meeting of the International Executive Committee, in Dublin in July, voted in favour of de-criminalisation, encouraging all their members to work towards achieving this in every country.

Rachel who was caught up in prostitution between the ages of 15-22, was devastated by this news as she knows from first-hand experience that ‘de-criminalisation’ will spell untold suffering for many thousands of women and youth (18-21 year olds) worldwide. What Rachel found particularly disturbing was the fact that the AI resolution was written in the context of human rights. She is adamant that the person providing the sexual favours for money is not equal to the person who is paying and because of this is open to suffering all sorts of abuse and humiliation. In sum, the basic premise on which AI bases its argument i.e. equality, because the provider of sex will have more rights and be better protected if the sex business is de-criminalised, is fundamentally flawed.

Our meeting with Pope Francis followed the general audience. Rachel presented her book ‘Paid For – My Journey Through Prostitution’ to Francis, who recognised it and engaged in conversation with her. Rachel on behalf of the ‘SPACE’ group (Survivors of Prostitution and Abuse Calling for Enlightenment ) expressed their gratitude for his understanding and the great support he is offering to women world-wide, who are being exploited.

As I shook hands with Pope Francis I mentioned the Amnesty International decision to decriminalise the sex industry. Pope Francis responded viscerally, clasping my arm tightly and looking anguished, he shook his head from side to side. I thought he was struggling to find the word in English to describe it, so I suggested ‘evil’. Francis said ‘it is more than this, because it is global and causes so much suffering’. We continued speaking, then as we finished he tightened his grip on my arm and right hand and with his eyes closed said: ‘we must pray and work together’. Then Francis looked straight at me and with a big smile repeated again ‘together’!

Rachel and I are deeply grateful for the understanding and passion that Pope Francis revealed during our short meeting with him. His support is hugely significant in the struggle that lies ahead to counter globally, the negative impact of the Amnesty decision. AI is a human rights organisation with a very good track record. This means that many people will believe that their recommendation to de-criminalise the sex trade must therefore be in the best interest of those providing sex for money. This is not so….

We then met with Archbishop Marcelo Sanchez and Gabrielle Marino his assistant, in the Pontifical Academy of Social Sciences, within the Vatican grounds. This meeting led to a plan of action, which entails obtaining support from a number of key people to submit a proposal to Pope Francis. The Archbishop extended an invite to Rachel to attend an upcoming ‘Youth Conference Against Human Trafficking’ to be held in the Vatican in November.

'Every person, and all people, are equal and must be accorded the same freedom and the same dignity. Any discriminatory relationship that does not respect the fundamental conviction that others are equal is a crime, and frequently an aberrant crime.”'Pope Francis, 19 January, 2015.

The following interview with Rachel was screened in 2013 following release of her book (06:10)