Arriving in Dublin, July 2001, as the incoming Director of Mercy International Centre, was exciting and a challenge and indeed a blessed time too.

By 2001 Srs Canice Hanrahan was MIC Board Chair, Marion McCarthy the first Archivist of MIC was available to give oversight to Heritage and Patricia March from the original Planning Group, was on Team. Mary Trainer rsm, the heartbeat of the vision, regularly responded to our questions and requests for clarity. It is true to say that the MIC Team stood on the shoulders of wise Mercy women who, along with the Board and Members of MIA, ensured the development of Mercy International Centre. What a gift!

In the foyer, just inside the two red doors, hung the Mission Statement and it was this gem which informed our decision making during my Directorship. It read:

Mercy International Centre
Is the Home of
Hospitality and Renewal
In which the friends of
Catherine McAuley
Share in her vision and values,
Reflect on her heritage
And with courage
Continue the contemporary
Ministry of Mercy Worldwide

MIC was indeed the Home of Hospitality. Hundreds of Sisters of Mercy and colleagues came to participate in programs and to spend time in Catherine’s House. Those on Team developed the practice of using the greeting “Welcome Home” and somehow this simple gesture became the heart of hospitality offered. And there were those wonderful breakfast table conversations which linked our Sisters across the world. I particularly remember one Saturday morning when there were Sisters from thirteen different congregations at breakfast. The tables became one and the sharings continued for hours. 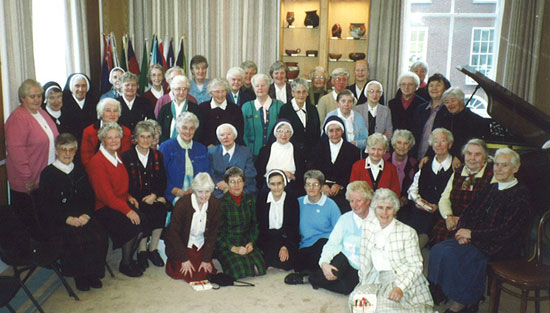 Participants in 'Back to Baggot Street'

The demand for the Renewal Programs, already in place by 2001, increased dramatically and Catherine’s Dublin came alive for those who trod the streets and drank in the history as told by Program Facilitators. There were many miracles during these programs and I have no doubt still are. I remember sharing the lift with one Sister of Mercy who looked at me and said “I will return home healed of my bitterness. It left me on the corner near where the Armstrongs lived”. Such graces were not uncommon. 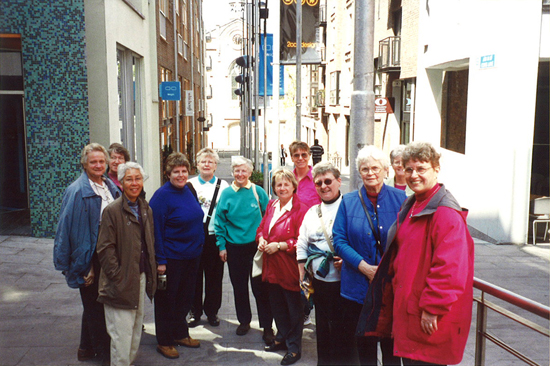 The Multi - Cultural Programs were indeed a great initiative of MIA. These programs provided the opportunity for our newer Mercy Members to connect with Catherine and to gain an understanding of global Mercy. The day that one of the participants arrived in my office and said “Before I came to Catherine’s House I knew her as a person on a page. Today she has become my sister” confirmed for me the value of these programs.

Requests for tours of Catherine’s house were also in great demand and so began the scheduling of Sisters both from on Team and from amongst the Sisters of Mercy Ireland to meet the need.

There were significant events celebrated. Amongst these was the celebration of the 175th Anniversary of the opening of the House of Mercy on Baggot Street in 1827. Bonnie Brennan (Catherine) and Noeleen Reilley (Mary Anne Doyle) and Bonnie’s young nephew (Wild Willy) arrived at MIC by horse drawn carriage, much to the curiosity of the passers - by. The day was a feast of re-enactments and rememberings and lots of good cups of tea.

The 10th Anniversary of the opening of MIC celebrated on 23 July 2004 was a highlight. This was not only a celebration but a unifying event as Sisters gathered, celebrated and allowed Mercy to be the connecting point. And the day was warm and the sun shone and the garden in all its beauty embraced the guests.

And let us not forget the replacement of the slate roof which had sheltered Catherine’s House of Mercy since 1827. It sounds simple but what a challenge! How many of us around the world treasure a little piece of the original slate with a quote of Catherine lovingly painted on it. Originally ten of our Mercy artists from Ireland and England responded to the call to come and paint slate. One of these women, Rose Fennessey rsm, continued to be the faithful painter until the slate ran out not so long ago. After the roof was replaced and the leaks stopped, the house was painted inside and out, re-carpeted and refurbished.

While I record these events with great clarity I am also deeply conscious of the generosity of our Leaders who contributed financially to the many capital works undertaken. You are remembered with love and gratitude and I suspect Catherine knows also of your generosity.

At the heart of all these happenings was a Team of vibrant Mercy women who gave their time, energy and love to the ebb and flow of life in MIC. You are remembered with love and affection.

There remain two significant memories of 30 June 2005. The first was a ritual during which the Mission Statement and the keys to the front door of Mercy International Centre were handed to Caitlin Conneely the incoming Director.

And the second was that poignant moment when Evelyn Gallagher, MIA Chair, arrived in Baggot Street carefully guarding a box of Catherine’s original letters being returned “home” from the Sisters of Mercy of the Americas. Ireland’s Rugby Team was being welcomed home on the same day and the viaduct across Dorset Street was adorned with a huge “Welcome Back” banner. In the telling of this story Evelyn used say she felt it was indeed “welcome back to Catherine”. These original letters were given by Evelyn to Caitlin, who in turn placed them in the hands of Marianne Cosgrave, Archivist for the Congregation of the Sisters of Mercy Ireland and Archivist of the MIA collection, directing Marianne to safeguard them in the archives according to the wishes of the Sisters of Mercy of the Americas.

And the story goes on…