The third of the four annual gatherings of Mercy Associates met in St John’s Wood on 16th September. Sixty six Associates listened eagerly to Sister Bonaventure Brennan, (affectionately known as Bonnie) who spoke of Catherine with sure knowledge and humour. Two gatherings of the Associates met in Clevedon, North Somerset, in April and in Endsleigh Centre, Hull, in June. The Associates came from many parts to listen, to hear and to respond. The purpose of these gatherings is for Associates from the four corners of England, Scotland and Wales to grow in the spirituality of Catherine, to meet each other and share. 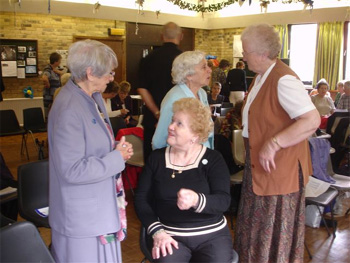 Sister Bonnie’s interest in and love of our Foundress led her to research thoroughly the life of Catherine and her first Associate, Sister Anna Maria Doyle. Her book: “It Commenced with two …” was published in 2001. Later she wrote “According to Catherine” a thematic approach on the words and wisdom of Catherine. Bonnie has developed a programme called “The Circle of Mercy” to provide formation for Christian men and women to come together in the spirit of Catherine. 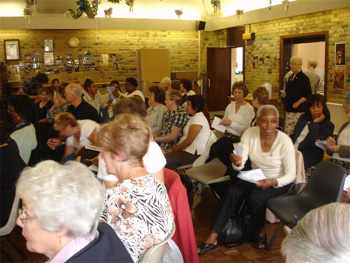 Some of those who gathered

The theme of the day was set during the morning Prayer in which a litany of the people who had a powerful influence on Catherine was recalled. It was a thought provoking insight into Catherine and was such a beautiful way to pray and think about those who influenced Catherine on her journey of life. Each person with whom Catherine was associated was part of her formation – whether it was the management of a farm, household, staff, catering, etc. It was simply as if Bonnie was having a conversation about somebody she knew and loved so well. Undoubtedly those at the gathering were all very aware of the story of our Foundress but somehow Bonnie was able to hold our attention by highlighting some details from her intimate knowledge of her. We are familiar with the powerful influence Catherine’s father had on her life - his love of the Church, sensitivity to the poor and his steadfastness. Bonnie also highlighted the qualities of her mother, Elinor, - a woman often referred to with negative vibes. Elinor was however a very amiable woman, gracious and accomplished. From her mother Catherine inherited refinement and culture which equipped her for the role she was play in society. She had an appreciation of the finer things of life, she was accomplished, she wrote poetry and encouraged others to do the same. Her letter writing showed great sensitivity, encouragement and compassion whatever the situation. Catherine was comfortable in whatever milieu she found herself. She was able to marry the two strands of society – the rich and the poor - with graciousness and compassion. Both her parents left a lasting legacy to Catherine. The challenge to us is: Who are the people who have and are influencing our lives? 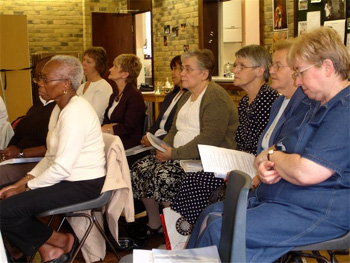 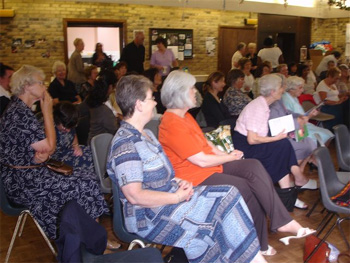 Associates came from all over Great Britain

The next Gathering of Associates takes place on Saturday 21st October at the Convent of Mercy, 62 Hill Street, Garnethill, Glasgow.