Editor: The Mercy family— near and far— gathered in person and online on Sunday for an inspiring and prayerful experience of Mercy Day Eucharist in the Baggot Street Chapel, marking 190 years to the day since the opening of the first House of Mercy, now Mercy International Centre and home to the Mercy family all over the world. 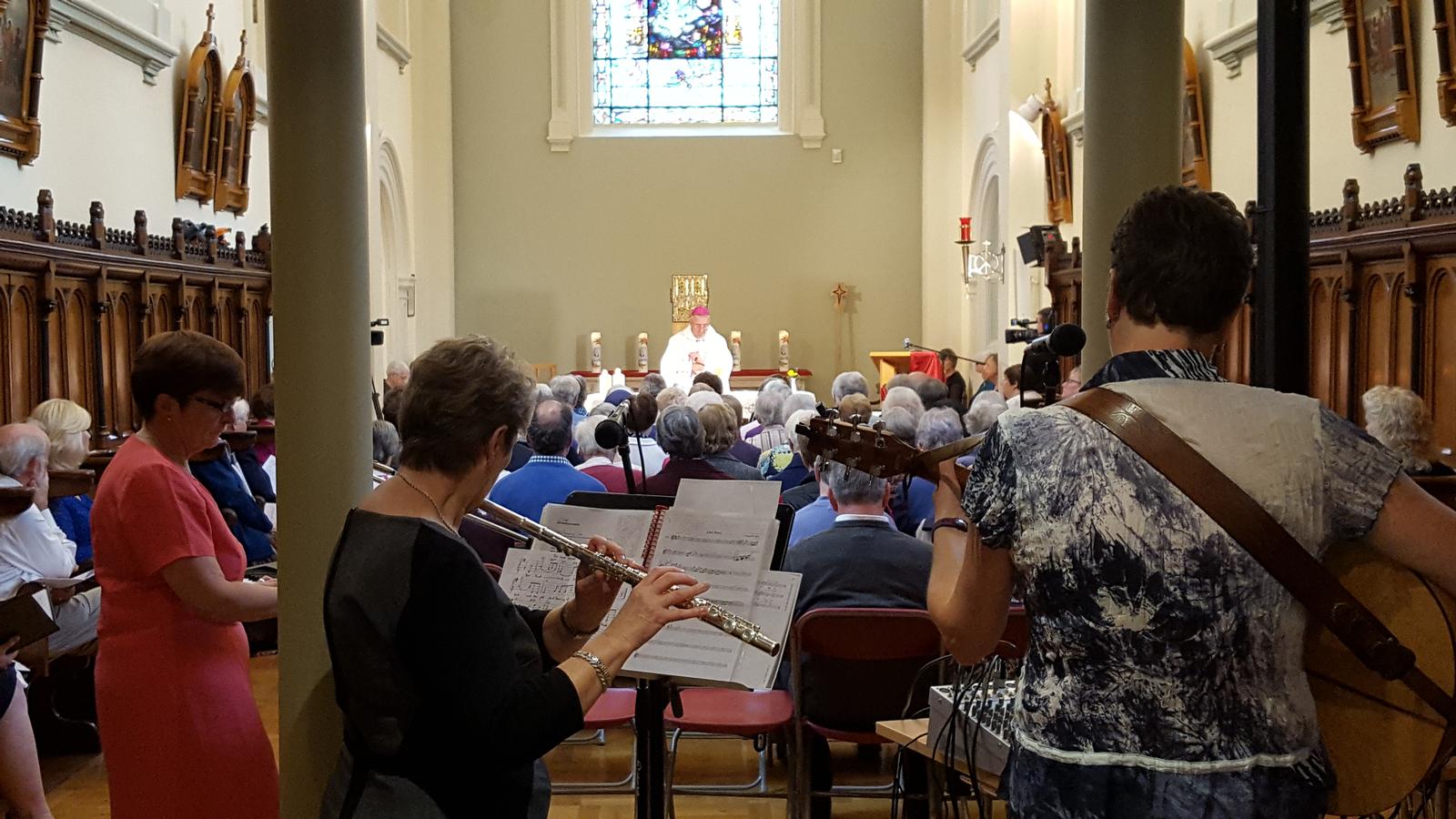 Representatives from the four Irish Provinces and each of the five continents where Sisters of Mercy minister were physically present at Baggot Street, many taking roles in the liturgy, thus emphasising Mercy's presence across the globe. Sisters from many parts of the Mercy world, including Philippines, Peru, Newfoundland, Aotearoa New Zealand, Australia, United States, England and Ireland, participated via Livestream and shared their sentiments online. Mary Trainer rsm (Americas) summed up the feeling of many in her post: 'My heart overflows with joy and gratitude that this day we celebrate with bonds of affection our world wide community. '

The celebration began with a procession into the Chapel. Áine Barrins rsm (MIA) was cross bearer and altar server. The candles, a gift to MIA from North Sydney Congregation for the 2014 celebrations, each representing one of the five continents, were carried  by Srs Margaret Scroope (Australia), Helen Diviney (Europe), Mary Mulholland (Americas), Liz Fletcher (Africa), Doreen Figueiredo (Asia).  Archbishop Diarmuid Martin presided at the Eucharist.

Brenda Dolphin rsm, Postulator (The Congregation) and Agnes Crowley (The Congregation) brought forward  the plans for the house and the original keys which, said Mary Reynolds rsm, Executive Director MIA, in her welcome and introduction 'in 1827 opened a door and unlocked potential to a new way of living the mercy of God'.

Jo Kennedy rsm read the extract from the Derry manuscript that accounts for the opening of the House:

'In 1827, Miss McAuley wrote to Miss Doyle saying that as all needful preparation would soon be completed, she might enter if she pleased on the 23rd or 24th of the current month, which was September. Miss Doyle though she did not then know the feast, fixed on the 24th but in another note she remarked that she should be particularly rejoiced to begin her labours that day as it was dedicated to Our Lady of Mercy, suggesting at the same time that the House of Mercy would be a good name for the institution.'

Mercy Day 2017 was a special occasion being the 190th anniversary of the First House of Mercy, but it was 'particularly joyous' , said Sr Mary 'because of the announcement in this Mercy week that a diocesan process of inquiry will begin next month in Tulsa, Oklahoma, USA to gather materials about an alleged healing through Catherine’s intercession'. She continued: 'Our prayer and hope is that this will advance the cause of Catherine’s beatification.' That prayer, that hope could be felt in the chapel.

The opening hymn, Marty Haugen's 'All Are welcome', led by Srs Marie Cox (guitar), Patricia O'Donovan (keyboard) Frances Kennedy rsm (flute) together with with Teresa Martin rsm (singer), captured the spirit of Catherine's dream: 'Built of hopes and dreams and visions, rock of faith and vault of grace'. Sr Teresa is the composer of the song 'The Kind Word' which accompanied the presentation of the gifts by Srs Carita Irwin and Maryanna Ryan (The Congregation).

In her pre-recorded greeting (PDF) before Mass which introduced the greetings from the MIA Congregation and Institute teams and MIA Board, Mary Reynolds rsm had highlighted the ongoing call to Mercy to hear and respond to what the cries of the suffering world might be in our time.

In his homily (PDF) Archbishop Martin reinforced this: 'The term "House of Mercy" refers not just to a physical building', he said. 'It is something more. It is a symbol of the entire charism of Catherine McAuley: a building of welcome for the poor and a building from which mercy is brought in innumerable ways into the lives, especially of those who need to experience mercy.'

The Prayers of Intercession were drawn from the reflection 'Home' written by Mary Wickham rsm (ISMAPNG) at the invitation of MIA to take the two key themes Displacement of Persons and Degradation of Earth which emerged 'out of the sacred listening and contemplative dialogue in which the MIRP groups engaged' and create a reflective narrative as a resource for us all to use on or around Mercy Day. Readers of the prayers were: Monica Hickey rsm (Newfoundland), Peggy Collins rsm (The Congregation), Kathleen Somers rsm (The Congregation), Catherine McEvoy (Circle of Mercy Northern Province) and Mary Klock rsm (Americas).

Mass was followed by the launch of the pictorial souvenir booklet 'A Visit to Catherine's House' and a delicious high tea and great craic (conversation) in the dining room and heritage areas for those able to be there in person.

May the blessings of this house-
A house
Imagined in unlikeliness
Dreamt with daring
Built with love,
Founded on Mercy-
Speak to your spirit
In whatever room in the world you are reading,
In whatever place you are called to mercy.

View the archived version of the Mercy Day Mass here where you can post your comment, response or reflection alongside those already recorded online.

Read Mercy Day Greetings online here. These include the greetings from the MIA Congregation and Institute Leadership Teams, Mercy ministries, Sisters of Mercy, Associates and partners in Mercy. The 'next generation' are well represented with greetings from a number of schools including Our Lady of Mercy N.S., Cahir, Co. Tipperary and Santa Barbara Catholic School School Guam.

Of interest: During Mercy Week (17-24 September), 35, 203 individuals visited our Mercyworld.org website, a total of 639,824 hits, to read the news stories, enjoy the Mercy Day greetings from near and far and to participate online in the Mercy Day Eucharist. In addition, many thousands read MercyeNews and followed us on social media.