Editor: The Mercy family— near and far— gathered in person and online on Saturday for a prayerful experience of Mercy Day Eucharist in the Baggot Street Chapel. 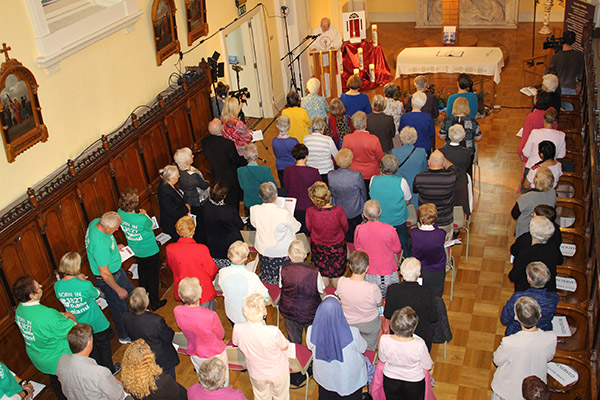 Representatives from the four Irish Provinces and each of the five continents where Sisters of Mercy minister were physically present at Baggot Street, undeterred by the Dublin bus strike and the poor weather. Many had roles in the liturgy. Such were the numbers at Baggot Street that those unable to be accommodated in the Chapel filled the International Room where they had the benefit of viewing the proceedings on the large screen. 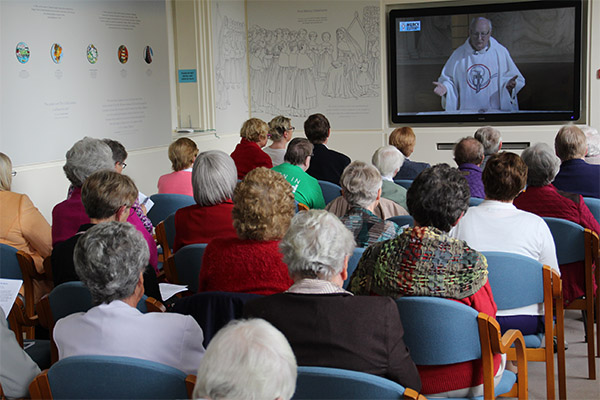 Sisters, Associates, partners-in-Ministry and partners-in-Mercy from other parts of the mercy world, including South Sudan, Timor Leste, Guyana, Cambodia, South Africa, Argentina, Newfoundland, New Zealand, Australia, United States, England and Ireland, participated via Livestream and shared their experience online. Gail Waring rsm (Americas) summed up the feeling of many in her post: 'It is a joy to be part of the whole across the world.'

In her welcome Mary Reynolds rsm, Executive Director MIA, highlighted the presence of so many representatives from the Mercy family physically present in the Chapel, as well as online in locations geographically distant and remote from Ireland, all sharing this day together. She then alerted us to another important celebration being held at the same time - the 175th Anniversary  celebrations of the second foundation (1841) made by Catherine McAuley in England which was also Catherine's last foundation - St Mary's Convent Handsworth in Birmingham.

Fr John Byrne OSA presided at the Eucharist. Rosaleen Hogan rsm was Cantor and Gerard Gillen, Professor Emeritus in Music at the National University of Ireland, Maynooth & titular organist of Dublin's Pro-Cathedral played  the magnificent Telford Organ. Gerard knows the instrument well, having advised MIA on its restoration and playing it at the re-dedication in 1999.

The first reading – 1 John 4:7-9, 11-12 - was read by Carmen Rosa rsm (Americas/Peru) in Spanish, while the second reading – from Tender Courage by Joanna Regan rsm & Isabelle Keiss rsm – was read in English by Cecilia Cadogan rsm (The Congregation). A number of the sung responses during Mass were in Irish. The use of the different languages added yet another dimension to our experience of this being at once both a local and a global celebration. 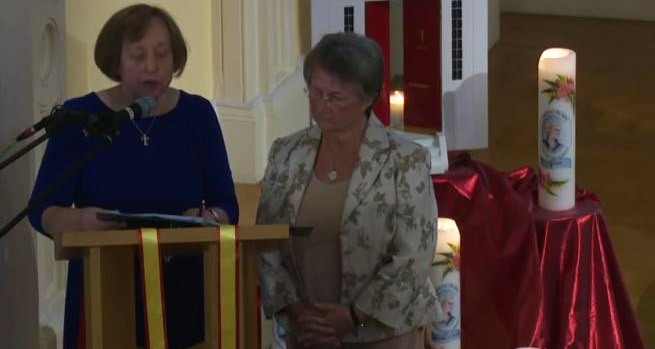 The most moving part of the liturgy was the Renewal of Commitment conducted by Mary Reynolds rsm (on the left) and Anne Reid (Americas Associate, Ireland). Sisters,  Associates and partners-in-Mercy promised once more to be 'doorkeepers of mercy' . The Sisters of Mercy renewed their vows and the lay partners 'accepted the challenge to live the Gospel of Jesus and to be a person of Mercy, visible in the world today'. All then sang the Suscipe as the seal of their personal commitment.

Mass concluded with  'A Litany of Mercy' written by Mary Wickham rsm (ISMAPNG). This had been our shared prayer in the days leading up to the feast. Here it was presented as an audio powerpoint with a number of the images from across the Mercy world. Some of these had been exhibited in the 20th Anniversary Photo Exhibition.

Following the Eucharist those present at Baggot Street adjourned to the dining room for a celebratory meal, friendly company and great craic (conversation).

You can view the edited version of the Mercy Day Mass here and post your comment, response or reflection alongside those already recorded.

The day was, said Joan McManus rsm (The Congregation) in her post 'Another step towards communion'.