Sisters of Mercy, Associates, Circle of Mercy Members, Friends of Mercy, Partners in Ministry and Staff all gathered at Mercy International Centre to celebrate Mercy Day. The gathering of more than sixty people was truly an international one and included people who lived or ministered in Ireland, Australia, New Zealand, United States, Canada, Newfoundland, England, Wales, East Timor, Papua New Guinea, South Africa, Kenya, Brazil, Pakistan, Samoa and Romania. The Eucharist was a joyful celebration, enriched by a full congregational choir, accompanied by organ and violin. A very inspiring homily was preached by Aine Barrins, rsm.

At the end of Eucharist, the Women’s Therapy Centre, which is locating in the original House of Mercy, was officially welcomed by Mary Reynolds rsm, Director MIA. She reminded the gathering that 183 years previously, on September 24th 1827, Catherine McAuley had entrusted the opening of the House of Mercy to Anna Maria Doyle and Catherine Byrne, so that lay women could minister to women and girls in need. As Patricia Bell, rsm, President MIA, presented a copy of Sr. Clare Augustine Moore’s beautiful illumination of Mercy, which captures within it a magnificent depiction of the Good Samaritan Gospel scene to the Centre, Mary drew a parallel between the work of the Women’s Therapy Centre (WTC), which reaches out to women who are abused and violently treated and the Good Samaritan. 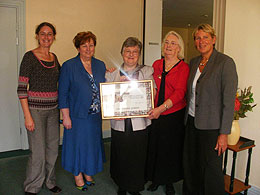 Ms Felicity Kennedy, Director of the WTC, in speaking of the ministry, reflected the very same belief as Catherine herself, when she said that impacting the lives of women in a way that brings wholeness, impacts the lives of their children, partners and the wider society. She pointed out that the ministry is with those whose trust has most been violated, either by an abusive partner or by those who have kept them or used them in prostitution and that their healing demands a safe and trusting environment. She commented on how appropriate the present setting and location is, both because of its long tradition of ministry to women in need and its current welcoming and peaceful ambience.

Sr. Jo Kennedy, chairperson of the Board of Directors, WTC used the analogy of story. She told the story of the founding of the WTC and referred to the long story of Mercy women, from Catherine onwards who ministered, in ways appropriate to each age, in this very place. She spoke of it now being a safe place where women can tell their stories and experience healing. She reflected on the present multi story building that stands on the original site of the House of Mercy and the stories it houses at present. In its basement are the Archives, that holds the historical story of Mercy, on its middle floors are the MIA facilities that has as its aim the living, telling and supporting of the Mercy story today and on the top floor is the Therapy Centre, where women’s stories of suffering are attended to with care by ‘the kind word, the gentle, compassionate look and the patient hearing of sorrows’.

Afterwards, all the guests enjoyed a meal together in the dining room and the Women’s Therapy Centre was open for visiting and viewing.