Editor: From the beginning of the Institute the letters of Catherine McAuley and other Mercy writings have been a source of union and strength among Sisters and have become central to Mercy life.

It was in recognition of this that the first issue of Mercy E-news was published on 13 August 2001. That first issue - text only, in letter format, written within the body of an email- was emailed to the 100 Sisters of Mercy world-wide who were known to have email addresses! 'Dear Sisters,' Adele Howard rsm began that first issue , '...Today is the first regular weekly Mercy-email among our group...' and for 48 weeks of each year since it has continued to be a weekly publication that now has faithful readers and contributors not only in the 40 countries where Sisters of Mercy and their Partners-in-ministry live and minister, but in many other parts of the world. 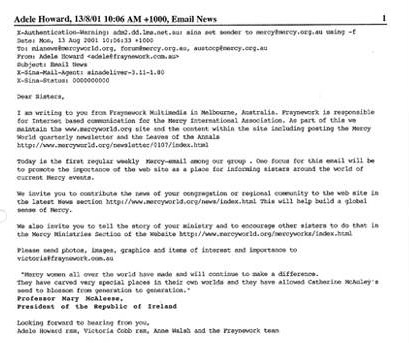 From the first issue readers were invited to 'contribute the news of your congregation'...'to tell the story of your ministry'...' to send photos, images, graphics and other items of interest and importance' in order 'to help build a global sense of Mercy'.

The second and third issues of Mercy E-news established the justice focus, highlighting the return in Australia of the Tjurabalan land to its original and rightful Indigenous owners, the World Conference Against Racism (WCAR) being attended by Mercies that was to take place in South Africa at the end of the month and drew attention to the Second Mercy International Justice Network (MIJN) Conference being held at Bronkhorstspruit, South Africa from 11-23 September. That third issue also saw the first contributed Members news item and the following week (issue four), 10 September, the first item was received from an MIA project - a report from MIC

On 11 September a first special edition of Mercy E-news was published, calling for readers to join the MIJN conference delegates in praying for peace in the wake of the attack on the World Trade Centre. This issue, published in response to this event, demonstrated to the Mercy world that here was a community newsletter and that with this means we could connect the Mercy world in a way that hadn't been possible before.

For the Mercy Day 2001 issue images were introduced for the first time and a week later (1 October 2001) a new graphic look including the E-news logo (right) was in place, with the by-line: 'Mercy E-news: The Online Newsletter of the Mercy World' and the footer introduced. An E-news design was taking shape. For the present time the E-news would be re-created each week into the news section of the mercyworld.org website.

On 24 October 2001, United Nations Day and the commencement of Disarmament week, the Mercy E-news read: 'Mercy women around the globe lit candles progressively from 7am in Aotearoa New Zealand then moving west. May this light encircle us with justice, mercy and peace and give clarity to our decisions and actions for peace in our world'. This lighting of a candle for peace was an initiative of the MIJN Conference delegates. The practice has continued since the conference with the delegates joined in this prayerful activity by other members of the Mercy network, the action often promoted through the highlight 'button' at the footer of Mercy E-news in the edition published closest to the 24th of the month. Since the creation of the online prayer spaces, the 'Light a Candle...' button has been linked to these to facilitate the posting of prayers.

The issue of Mercy E-news published on 5 November 2001 was distributed in both HTML (in colour, with images) and plain text (text only) and by the end of the year 21 issues had been published, there were subscribers in 31 countries and subscriptions numbered 800.

On 23 December 2001 a message was received from Cecilia Heduan rsm in Argentina (in English and Spanish) 'about the situation in our country'. Cecilia asked that Adele 'take care of sending it around'. With that phrase Cecilia captured the spirit of the purpose of Mercy E-news that is, shared awareness of and concern for one another. And so, on Christmas Eve, Cecilia's request circled the globe to Mercy people that 'As we light our candle on the 24, please pray for us, for our people and our country' and 'May the infant about to be born grant us the grace of not falling into a Mercy default'.1

In 2002 the structure of Mercy E-news was formalised in its layout. Mercy Project items preceding Member Congregation news items and the introduction of the 'Featured Mercy Website', 'Technical Tip' ( since renamed Digital Life in recognition of the place technology plays in our lives today), and 'Mercy Facts' sections added. A new design for the HTML version marked this second year of publication and a content management system for E-news creation and distribution was implemented. Once again that year the E-news was used to call the Mercy world together in prayer, with the invitation in March 2002, by Marie Chin rsm (then MIA President) to all Sisters to pray the Suscipe for peace across the world. 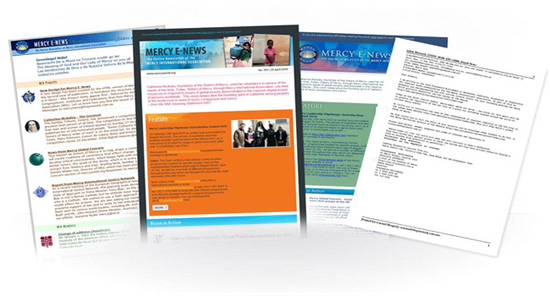 Copies of Mercy E-news across the years

With the rebuilt mercyworld.org website launched in November 2003, Foundation Day saw access made possible to the current and archived issues of Mercy E-news  from the homepage of the website. A significant addition in early 2004 was the hyperlinking of contributors' names (and the names of those to whom messages could be sent) to facilitate direct communication between readers and contributors. This technical development has significantly assisted in the growth of personal connections, the sharing of ideas, the exchange of information and the development of groups of interest across the Mercy world.

Over the past ten years incremental improvements have been made to refresh the template design, improving the appeal, usability and accessibility of this weekly communication for the readership and the functionality of the technology used to create each edition.

The publication of the 500th issue of Mercy E-news on 6 February 2013 was an occasion for subscribers to reflect on the place this community newsletter held in the minds of its readers. Many messages of thanks and congratulations were received for all who had contributed to its creation, development and weekly publication. Those messages can be read here

For MIA's 20th anniversary year a new template design was introduced with the first issue for 2014. This new design emphasises the visual elements through the increased frame size of each photo, particularly the Feature image. The introduction of the 'Further Resources' section (previously included in the Mercy Links section) has proved very popular and is the first point of call for many readers each week.

Originally published on a Monday, Mercy E-news is now published on a Tuesday/Wednesday morning (depending on timezones), available without charge to any member of the global Mercy family and to anyone who is interested in the vision and mission of Mercy International Association (MIA). Once published it is automatically archived on the website, accessible from both the homepage page and from the 'News' section.

Contributions continue to be sought for publication from Sisters and members of the Mercy network that are a means to 'educate, inform and inspire' the readership. These include items on local Mercy activities that have a broad appeal, issues that are focus areas for MIA and topics that are of interest to the Mercy community.

The regularity and accessibility of this publication, the consistency of format and structure, the variety and tone of content, the contributions, appreciation and networking of readers have all contributed to making Mercy E-news a central and greatly valued means of communication for Mercy International Association.

This concludes the series on the developments in digital communications at MIA over the past twenty years.

From its inception, MIACOM supported the communication requirements of MIA in an ongoing way, working with Fraynework in the development of the mercyworld.org website, the creation of the weekly Mercy E-newsletter format and the production of the CD-Rom 'Mercy and Justice Shall Meet'.

Through these means Sisters of Mercy have collaborated, been educated and informed, prayed for each other and strengthened their bonds of union. Each of these productions has helped, and continues to help, Sisters of Mercy and members of the Mercy family to understand that the life and mission of our own part of the Mercy world is more expansive than our local geographical area and region - that we are each an important part of a global reality known as Mercy International.

1. Editor: As this article on Mercy E-news was being written, Argentina's bishops were protesting about the "rising tide" of violence and corruption in the country. In a statement entitled: 'Blessed are the peacemakers', released on 8 May at the end of their plenary conference, they said: "Some symptoms are obvious, others more subtle, but in one way or another we are all affected. We pause to reflect on this drama because we believe that love conquers hate and that our people yearn for peace." For more on this,see Argentina: Bishops say country is 'sick with violence'