Mercy Educators from Around the World Gather in Omaha to Discuss, Respond to Racism

About 170 educators and administrators from 45 Sisters of Mercy (Americas) schools around the world met recently in Omaha, Nebraska, USA,  to address the scourge of racism and how to respond. Participants came from across the United States, Argentina, Honduras, Guam, The Philippines, Belize and Jamaica. 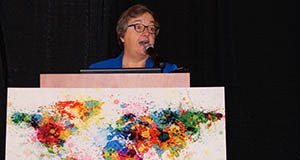 The keynote speaker was Deirdre Mullan rsm– Northern province of the Congregation of the Sisters of Mercy. In her address, Sister Deirdre said that the conference subject poses a great significant, ever old, ever new question:

“Who is my Neighbor?”

Using the life of President Nelson Mandela who was without doubt, one of the greatest human beings ever to grace this Earth Deirdre made a correlation between racism in South Africa and a different sort of racism in N. Ireland.

Nelson Mandela.  He was born on 18 July 1918 in the small village of Mvezo, on the banks of the Mbashe River, near Mthatha, in the Eastern Cape of South Africa, as the First World War was entering its final months.

The following day, 19 July 1918, in the town of Derry, on the banks of the River Foyle, in the northwest of Ireland, my father was born. One was an African baby, with black skin, the other a European baby, with white skin. Neither was born to hate the other. Both grew up in deeply divided societies.

Near the end of his autobiography, Long Walk to Freedom, Nelson Mandela wrote the following:
No one is born hating another person because of the color of his skin, or his background, or his religion. People must learn to hate, and if they can learn to hate, they can be taught to love, for love comes more naturally to the human heart than its opposite. 1

Mandela emerged, not calling for retribution and revenge, but proclaiming his hope for a rainbow nation – in which all the peoples of a new democratic South Africa would be cherished with the respect due to every human being born upon this earth.

During the presentation Deirdre used 3 very powerful short films to illustrate her point. The Youtube dvd – Citizens on a pale blue dot was followed by DNA testing and how we are actually all connected and Black and White – one heart, which tells one of the most moving stories of the 21st century: ‘Black’ and ‘White’ Human Hearts – the amazing story of NBL legend, Rob Carew, and Konrad Reuland, the white boy he inspired. Konrad Reuland was a young, white NBL star. His great hero from childhood was the legendary Rob Carew, whom he briefly met as a boy when Carew visited Konrad’s school. This is the story of a heart full of love. A heart that had no hate or prejudice. A heart that beats as one humanity.ii

Her powerful presentation concluded with three quotations, two from the great Carl Sagan….

“Every one of us is, in the cosmic perspective, precious. If a human disagrees with you, let him live. In a hundred billion galaxies, you will not find another.” iii

“For small creatures such as we the vastness is bearable only through love.” iv

And Catherine McAuley challenged us:

“Try to act at all times and places that if the Lord were to appear, he would not be ashamed to point you out as one of his own.” v

Sr Deirdre concluded by saying that Catherine McAuley released in us what the great Irish poet and Nobel Laurate, Seamus Heaney called – The Canton of Expectation equipping each of us to fulfill expectations by doing everything we can to turn lack of opportunity into achievement. For many vulnerable people the Sisters of Mercy were/are the bridge to confidence and success. Catherine McAuley’s work is not complete - her legacy of respect and equality for all is in our hands!

As reported in the Catholic Voice of Omaha