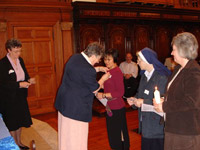 Four Gatherings of Associates took place during 2005 in Clevedon in the West Country (May), Hull in the North East (June), St John’s Wood, London (September) and Edinburgh in Scotland (October). Associates and Sisters came from the four corners of Great Britain. All the venues were well attended and the opportunity to meet, to mingle and share with a wide variety of groups was much appreciated. In each of the venues there was the face of Mercy offering hospitality – the warm welcome and the comfortable cuppa. 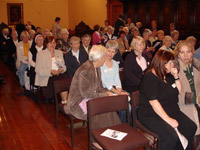 The Theme of the days was “Wearing Catherine’s Mantle — The Mantle of Justice.” Sister Sheila O’Gorman, Mercy European Geographical Area Co-ordinator for Justice, led the days which were arranged by the National Commission. Each day was very different depending on the political situation in the UK and on the issues coming from each group. Sheila used Scripture and the CDROM “Mercy and Justice Shall Meet.” She centred on the Story of Kenya: Denial to Healing. Her informal but informative style kept her audience enthralled while she led them to consider the meaning of Justice in the Associate context. 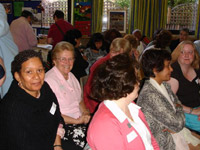 She encouraged them not to feel frustrated by the enormity of the task, but to find and pursue justice projects wherever they are. There was never a dull moment! Questions were asked and challenges posed. The groups were enthused about justice for self, for others, the earth and the world. “The scope for exercising justice is tremendous.” “We carry the possibility of bringing healing and compassion to others, to self and to the whole of creation.” She stressed the meaning of justice and mercy and how small local groups could have a big effect by using the opportunities presented to them wherever they were. “We are called to be men and women of Justice moving to do something to make life better for the other - the poor, the refugee, the asylum seeker… As always, she enthralled the Associates with her easy and engaging style and stimulated much thought and discussion. She challenged us to “Make sure you have a good cup of tea” and make sure it is fairly traded! Catherine was there with us and we ask her to walk with us, to act with us and speak with us. 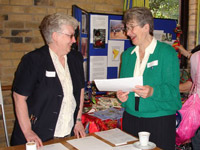 Sister Sue Morrison, dressed as a poor person in Peru might well be, took us to the heart of Peruvian culture and their way of life and introduced us to the plight of the poor. She had a stall with very colourful crafts which had been made by the Peruvian women. All proceeds from the sale of the crafts go directly to the Peru Mission. Her presentation touched the hearts of the groups in a special way. 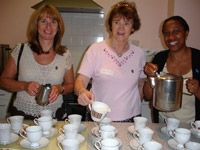 Each of the days was interspersed with prayer and reflection and closed with Mass offered by our national Chaplain, Father Bernard Eager. He wore a Vestment made for him by a member of the Stechford Associate group which shows the Associate Symbol. 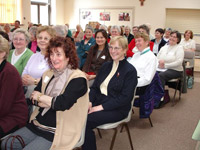 The Associate Symbol is worn by all the members with pride.