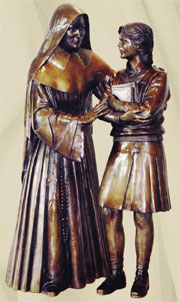 Foundation Day 2004 was an extraordinary celebration for Mercy High School, Baltimore, Maryland. On Monday, 13 December, students, faculty and staff, trustees and special guests gathered in anticipation of the unveiling and blessing of a bronze sculpture of Catherine McAuley and a Student, titled “Mentor.” Mercy was honored to welcome its sculptor, Sr. Gael O’Leary, RSM, of Auckland, New Zealand, who traveled many miles to address the Mercy High School assembly on this day. Gael, Director of the newly established Mercy Sculpture Centre in Melbourne, Australia, is a painter, sculptor, and teacher of sculpture, whose works are found in New Zealand, Australia, Western Samoa, England, and now, in Baltimore.

After the welcome and introduction by Sr. Carol Wheeler, RSM, Principal of Mercy High School, and the opening prayer by Student Council President, Christie Adams, Gael spoke of pondering and praying over how to depict Catherine in this sculpture—until awakening in the middle of the night with the words “I walk with them” in her head. She described knowing that Catherine had spoken these words to her as an incredibly personal experience, leaving her with a deep sense of calm about how to portray her subject. Her address described the parallels between the processes involved in creating the sculpture and life experiences which helped shape Catherine McAuley and her destiny: the framework provided by Catherine’s father, the molding of her soul by her life experiences and belief in her call to God, the forging of a woman who went beyond the boundaries of race, religion or class.

Gael spoke of Catherine as woman whose values are as relevant now as they were in 19th Century Ireland. She walked not only with the poor and most vulnerable of Dublin but also with the wealthy, as she inspired benefactors with her vision. She walks with us now and into the future as a model of faith, compassion and inspiration. Cast in enduring bronze, her image walks forever by the side of the Mercy student as her mentor and her friend.

Immediately following Gael’s address, Mercy students and faculty stood and sang “Mo Maria,” a song of love for Mary, in Maori, the language of the first inhabitants of New Zealand. This outpouring visibly touched Gael as she sang along with the assembly. Then, after the recitation of Catherine’s “Suscipe” and prayers of intercession, and during the singing of “Misericordias Domini,” a procession of student leaders, faculty and special guests moved to the lobby for the unveiling and blessing of the sculpture, which was simultaneously broadcast into the auditorium. Gael and Elizabeth Koneyak, President of Mercy’s McAuley Club, unveiled the sculpture, followed by the prayers of blessing offered by Monsignor Dennis Tinder, Sr. Marie Foley, RSM, Ms. Elizabeth Lambertus, Sr. Carol, and Christie Adams. Everyone in the lobby and in the auditorium joined in saying the final blessing of the sculpture with all right hands raised. Following the closing hymn, every student was able to exit the auditorium and pass the sculpture for a personal look. All were invited to place prayer intentions in baskets at the foot of Catherine and the Student.

The life-size sculpture, standing in the center of the lobby of The Harry and Jeanette Weinberg Auditorium, depicts Catherine with a Mercy Girl in full uniform (detailed down to the “Mercy” on her sweater). It is a gift to Mercy in memory of Msgr. Andrew E. Foley (+2002), brother of Sr. Marie, and Frederick Grant Wheeler, Jr. (+2001), brother of Sr. Carol.