Sister Rose Carmel McNamara of the Institute of Our Lady of Mercy, GB has received a prestigious award for her work among the people of Bucharest, Romania. 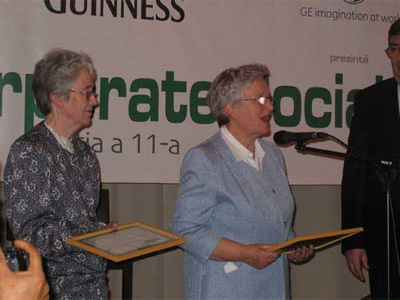 While on holiday in Romania in the year 2000 she was struck by the problems of the marginalised there and with the blessing of the Congregation returned to Bucharest that October. She started work with HIV positive children, teaching them English and befriending them in numerous ways. The children enjoyed many social outings, including picnics, visits to restaurants, cinemas and parks.

Since then she has established the Association of Our Lady of Mercy, which has many volunteers who help to spread Mercy to about 150 poor elderly people and 25 families. The reason why so many in Romania are poor is because pensions and wages are so low. The average pension is between €20 and €70 per month and a monthly wage for the low paid worker is about €100 (£67).

After the fall of Ceausescu people, who moved from the countryside to Bucharest to get jobs, were unable to find work and now find themselves with no pension. Some even say that life was better for them under Ceausescu as then when they queued for food they did get it but now they have no money to buy it.

Rather than just giving handouts to poor families, the Association of Our Lady of Mercy encourages them to help themselves. They look at the whole family situation and where families are making an effort to give their children a little more in life, Rose Carmel and the volunteers try to support their health, education, clothing and food according to need.

The plight of the elderly is great indeed. More jobs are being created for younger people but the elderly are left behind. The life expectancy rate for men is far lower than that for women. As a result many women are forced to fend for themselves, alone in bleak, high-rise flats with little state support. The Association brings its senior citizens together on a monthly basis and provides them with a meal, food for the month and any other basics they need. During the winter they give them extra clothing and medicine. One of the highlights of the year is the Christmas Dinner provided for them by the management and staff of the Hilton Hotel in Bucharest. Their generosity with food is repeated from time to time throughout the year. Rose Carmel also receives support from Britain and Ireland especially from parishes in England where she has previously worked. So many are generous with their time and efforts which are greatly appreciated by the people of Bucharest and the Association of Our Lady of Mercy.

The Bucharest Business Weekly newspaper, recently presented Rose Carmel with their Corporate Social Responsibility Award in recognition of her work for the poor.

For further information about the Association of Our Lady of Mercy, visit the website.