In 1996, a meeting was held in Mercy International Centre in Dublin Ireland. All Mercy Congregations throughout the world, including the independent Congregation of the Sisters of Mercy in the Philippines, were present. Each Congregation had been asked to send their justice personnel to this meeting prepared to discuss how we might use our knowledge of and commitment to the works of justice and peace more effectively. 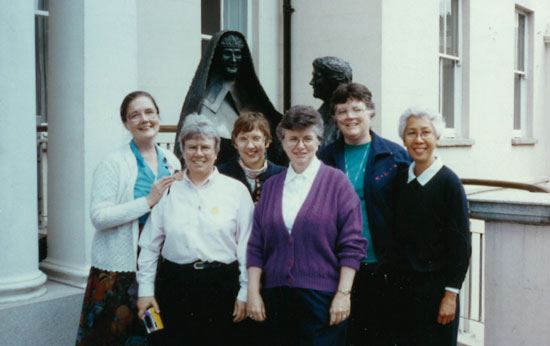 After several days of conversation, it was the stated passion of the group that we needed to find a way to use all our voices to speak as one on the vital issues of our day. Instead of reading about and analyzing issues effecting people throughout the world from other sources, we would use our best resources to gather our information from the people we worked with and to whom we ministered. We would have actual "eyes and ears" on the ground where these issues were being acted out. And in times of crisis, the united voice of Mercy could hopefully be heard in a timely and articulate manner to aid in bringing about a resolution.

The Mercy International Justice Network was to be a structure whereby there would be a lead person in each country known as the country coordinator. This person would connect with other Sisters working in various ministries and have them give input and analysis around important issues of the day effecting their country. This information would then be shared with all other Mercy Congregations as the basis for our analysis and as an aid for taking appropriate actions to effect change. We would also use our resources at the Sisters of Mercy Office at the United Nations to foster a better understanding of international realities.

A committee was set up consisting of four Sisters, Suzanne Ryder-Ireland, Wendy Flannery-Australia, Dale Jarvis and myself, Americas, who were charged with the oversight of the Network. We arranged for regular conference calls to keep abreast of what was going on and to provide support and guidance on where and how the Network should next focus its attention.

While I could write more about the history and activities of the Network, I see this article as a way of providing some insights on why some actions for justice work better than others!

The Network lasted several years but was never seen as a strong and vibrant part of the Mercy commitment to the work of justice. I have often reflected on why that happened. Now I would like to share some of the insights I gleaned from having been a part of the network from its inception.

To engage in effective actions for justice, there must be concentration around and commitment to a specified action or cause. No group can spread itself over several issues or it quickly loses focus and energy. That was one major difficulty with the Network. Too many issues whereby the necessary analysis and actions could not be coordinated.

Another drawback was effective communication. Several of the Sisters who were the country coordinators lacked communication technology and in some cases basic electricity to run that technology.

But it was also clear that some Congregations were less enthusiastic about the Network than others. Without support from those who held the means to make the Network a success, it faltered and in many cases never even got off the ground.

I still believe that the Mercy commitment to justice is strong despite our inability to harness its passion as effectively as we might. While still adhering to the message of "Think globally and act locally", I don't believe we have understood how to do that effectively yet. Until we find ways to understand the global connections to our local and national challenges, we will continue to fall short of the goals we set for ourselves in bringing about a more just and peaceful world. We will also continue to overlook the tremendous resources we have in our Sisters throughout the world in helping us understand our global reality.