Editor: In 2008 we published a wonderful story of a small boy in Nigeria who found a missionary magazine at the back of a church in which he read an advertisement that concluded: 'If you would like to be a Sister of Mercy, write to the Convent of Mercy, Barnsley', a large town in South Yorkshire, England. The boy wrote to that address and his letter brought a reply from Sr Mary Aloysius (Cathleen Manning). So began their correspondence and sometimes Sister Mary Aloysius enclosed a ten shilling note. This money made a huge difference to the boy and his family, and helped ensure he had an education. 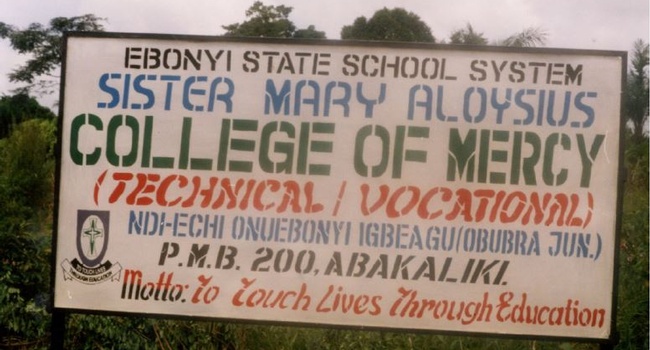 The boy - Boniface Ezaegu - became the Barrister General of the Ebonyi State in Nigeria and, in gratitude for his own education, he built a school in memory of Sister Mary Aloysius. Each year on 19 January, the anniversary of her death, Mass is celebrated in her memory and the school enjoys a holiday from formal classes.

Boniface has now retired as Attorney General of the Ebonyi State but his involvement with the school continues. Last month he wrote to Sr Philomena Bowers:

'Your students over here are sending their greetings to you. In fact, I wished you were around here yesterday to enjoy the social/cultural performances in commemoration of the death of Sister Mary Aloysius. Usually, we do the celebration on 19 January each year but we couldn't do it on that date this year because of an outbreak of a disease called Lasser Fever which claimed the lives of many patients, doctors and nurses...

May the soul of Sister Mary Aloysius and the souls of all the faithful Christians who have departed rest in perfect peace. Amen.

We will continue to be grateful to you for your efforts to keep us in existence.'