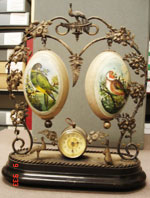 A new exhibition at the Australian National Museum opened on St Patrick's Day this past week to tell one of the nation’s great home grown stories - the experience of the Irish people in Australia. One of the 450 objects on display in this exhibition is a Mercy treasure of an emu egg clock.

The emu egg clock originated in Australia and was brought to Ireland by boat in 1871. Mother Vincent Whitty, foundress of the Brisbane Congregation of Sisters of Mercy, returned to Ireland that year to recruit additional young women for the mission of Mercy in Australia. She brought with her the clock that is decorated with two emu eggs and gifted the Baggot Street community with this treasure. Mother Evangelist Forde was the superior of St. Catherine’s Convent on Baggot Street at the time.

On the emu eggs are painted two birds indigenous to Australia. The history of the clock is not clear in providing the detail of whether the birds were painted on the eggs prior to the clock’s departure from Australia, or if perhaps Sister M. Clare Augustine Moore painted them. The birds on the eggs are believed to be a European Goldfinch and a Western ringneck parrot. 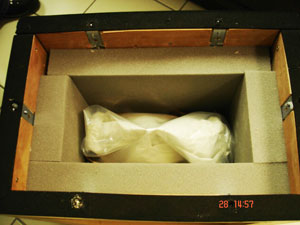 This clock, which has been on display in the Heritage Room of Mercy International Centre, attracted the attention of curators of the National Museum of Australia who requested permission to exhibit it in an exhibition entitled “Not Just Ned: A True History of the Irish in Australia.” The exhibition features 450 objects that tell the story of the Irish presence in Australia, from the very early days of convict settlement through two centuries of engagement in Australian society. 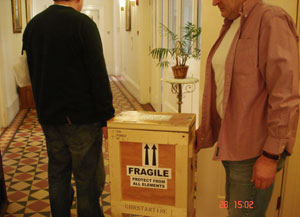 In the opening ceremony of the exhibition in Canberra this past Thursday, Arts Minister Simon Crean said, "Speaking as an Irish-Australian, our nation's story has unequivocally been enriched by the Irish. They came from a land ravaged by poverty and hardship, but the gifts they brought to our shores were immense.”

The exhibition will be at Canberra until 31 July 2011 when it will travel to other Australian locations. The emu egg clock will return to the collection of Mercy International Centre in June 2012.