Today is the 72nd anniversary of the bombing of Nagasaki which followed the bombing of Hiroshima three days earlier (6 August 1945). Together these bombings resulted in an estimated 199,000 casualties. 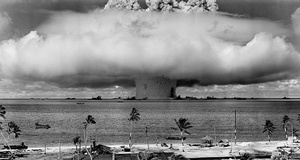 We are encouraged by the UN Treaty on the Prohibition of Nuclear Weapons—after a decade-long effort by the International Campaign to Abolish Nuclear Weapons (ICAN)—which will open for signature by states at the United Nations in New York on 20 September 2017. However, with nuclear testing in North Korea and President Trump believing that the United States 'must greatly strengthen and expand its nuclear capability', let us pray for an end to the threat of nuclear war by the reduction of the number of weapons held by all nation states to zero.