Yesterday, 27 January, 2015, International Holocaust Remembrance Day, many heads of state, dignitaries and about 300 Auschwitz survivors commemorated the 70th anniversary of the liberation of the German Nazi Concentration and Extermination Camp Auschwitz - Birkenau, by Soviet troops in 1945. The ceremony took place in front of the Death Gate of Auschwitz II-Birkenau. 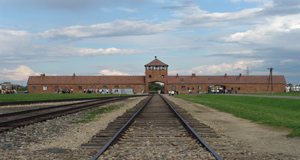 On this significant anniversary, in remembering the unimaginable loss of life of Jewish, Roma and other peoples, and the enormity of the suffering of the living as a result of this genocide, let us determine anew that ignorance, prejudice and bigotry will not dictate how we encounter, respond to or treat those whose culture, heritage, background, way of life or faith mean they are "different" from us.

Editor: Readers might care to read the reflection by Mary O'Sullivan rsm (The Congregation) who works in the Education Section of the  Centre for Dialogue and Prayer in Oswiecim (Auschwitz), founded in 1992 for all those who were touched by what happened in Auschwitz-Birkenau. Writing for eNews in 2009, Mary spoke of the Centre's dream for 'a future filled with life, hope and shalom so that the last word “after Auschwitz” no longer belongs to the power of evil and death but to the power of Love.'
May it be so.
Read Mary's article here

World leaders, including the presidents of Poland, Germany and France, join Auschwitz survivors at the site of the former Nazi death camp to mark 70 years since its liberation