MIA Prayer Intention for the Coming Week: Peace on Earth

On Monday this week (11 April) we marked the 53rd anniversary of the release of John XX111's landmark encyclical Pacem in Terris (Peace on Earth) . Written in the midst of the nuclear arms race and the Cold War, this was the first papal encyclical addressed not only to the Catholic faithful, but also to all women and men of good will. 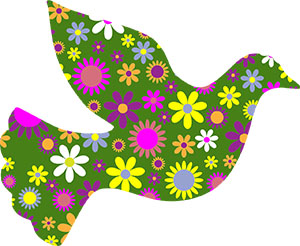 'But has today’s world learned any lessons from Pacem in Terris? Are the words "justice and solidarity" found “solely in our dictionary or are we all working to realize them?' (Pope Francis, 2013)

67 countries and 698 Militias-guerrillas and separatist groups are currently engaged in civil unrest and armed conflicts according to the Wars in the World website. These groups include Boko Haram who kidnapped 276 schoolgirls (Bring Back Our Girls), two years ago (14 April), of whom 200 remain missing.

Let our prayers be for peace and safety for all people.