This week marks the fourth anniversary of the outbreak of Syria's civil war. 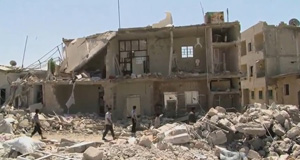 'At the beginning of the conflict...1 million people needed humanitarian assistance inside the country. Today, that figure stands at 12.2 million. 3.8 million people have fled to neighbouring countries. We must not allow the world to forget Syria and the atrocities being committed against its people.'

Last Sunday Bishop Antoine Audo sj, Chaldean Bishop of Aleppo and President of Caritas Syria, wrote in the British paper, The Telegraph, 'I am sustained by the daily acts of solidarity from my brothers and sisters around the world ... And as I walk through the dust and the rubble, I am not afraid.

St Paul’s virtues of faith, hope and love have rarely been in greater need, or under greater pressure, as we face the fourth year of this war. But I have faith in God’s protection, hope for our future, and my love of this country and all its peoples will outlast this war. I must believe that, and I pray that you...will stand with us as long as our struggles endure.'

Let us join our prayers for peace with those of Bishop Audo and the Syrian people.