In the past ten days the Philippines has experienced Typhoon Koppu, Mexico has been impacted by Hurricane Patricia with floods now threatened along the Gulf Coast and other parts of the southern United States, and a 7.5 magnitude earthquake has hit north-eastern Afghanistan and Pakistan with tremors felt in northern India and Tajikistan. 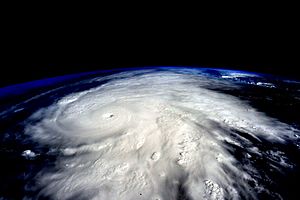 We pray for the relatives, friends and communities of the deceased victims and for all who have been injured in these extreme weather events.

We affirm the appeal issued by Cardinals, Patriarchs and Bishops from across the globe who this week joined Pope Francis in pleading for a major break-through in Paris, for a ‘comprehensive and transformational agreement supported by all based on principles of solidarity, justice and participation... that protects our common home and all its inhabitants.’
Read their appeal here: [English], [Spanish]

Image: Hurricane Patricia (2015) as seen from orbit during Expedition 45 of the International Space Station. Source: Wikipedia