MIA Prayer Intention for the Coming Week: Welcoming the Stranger

The figures are staggering: 59.5 million million people fled their homes and sought refuge and safety in 2014. 'Globally, one in every 122 humans is now either a refugee, internally displaced, or seeking asylum. If this were the population of a country, it would be the world's 24th biggest' says UNHCR's annual Global Trends Report: World at War 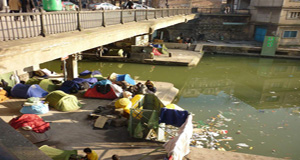 The recent influx of migrants into Europe, mostly from the Middle East and Northern Africa, fleeing war or economic hardship, has overwhelmed some countries as news reports have shown.

EU interior and justice ministers will meet in an emergency session in Brussels on 14 September for talks aimed at resolving the crisis.

Let us pray each day in the lead up to that meeting that a solution may be found to welcome the strangers in our midst.

Image: A large group of Afghan refugees have begun living on the Canal Saint Martin underneath a bridge. (2010). Licensed under the Creative Commons Attribution 2.0 Generic Licence