'Building a peaceful and better world through sport and the Olympic ideal' was the resolution adopted by the UN in November 2017. 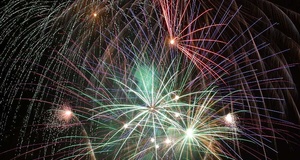 Last Friday, at the opening ceremony of the 2018 Winter Games, we saw the ideals expressed in that resolution in action as the North and South Korean athletes entered Pyeongchang Olympic Stadium together, waving flags showing a unified Korea. We saw it when the sister of North Korea’s leader, Kim Jong Un, shook hands with South Korean President Moon Jae-in. We saw it when the Vice President of the United States, Mike Pence, sat there near to the North Korean official representatives when so recently and for weeks we all held our breaths over North Korea-US tensions and nuclear threats.

On Friday evening we saw fireworks of celebration instead of the whizz-bangs of war. We saw that peace is possible.

As we each enjoy and admire the grace and skill of our own country's athletes, and that of the athletes of the 92 countries and territories participating in these Games, let our prayers be for continuing peace.