In the wake of the latest tragedy over the weekend in which an estimated 800 refugees (including 60 children) fleeing war and persecution drowned in the Mediterranean, the President of the Commission of the Bishops' Conferences of the European Union (COMECE), Reinhard Cardinal Marx, has issued the following statement- 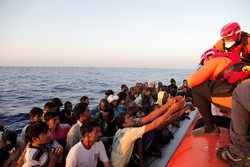 While remembering in prayer the victims of this tragedy, MIA asks the Mercy family to pray that the Heads of State and Government meeting on Thursday will, in the words of Cardinal Marx, 'work to find concrete proposals for the establishment of human asylum and migration policies supported and implemented in solidarity by all member states of the European Union'.

We also ask for continuing prayers for all who set out from the land of their birth, risking everything in search of freedom and a new home, that they will find welcome and safety.