Over the past few years, Monte Sant' Angelo Mercy College New South Wales (Monte) has become increasingly concerned with its impact on the environment.

As a Mercy College committed to the pursuit of justice, we view social justice and eco-justice as inseparable. Ecological sustainability is not just the responsibility of a few members or students, but it requires the involvement of the whole College community. 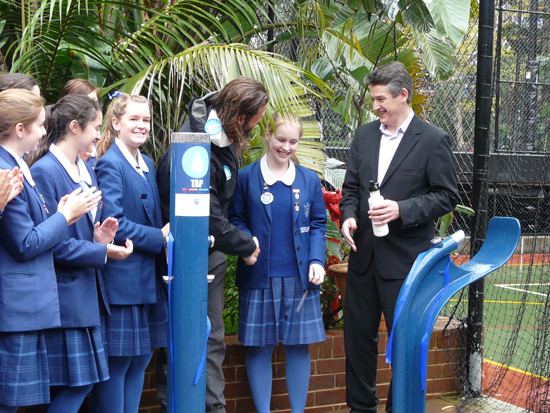 Claudia Saunders, the 2009-10 environmental captain at Monte San't Angelo, and students with one of the the state of the art water bubblers with Jon Dee, Environmentalist (right) and David DeRothschild, Activist and Philanthropist on the day the initiative was launched

The introduction of water stations and the banning of plastic water bottles1 was an initiative implemented by the 2009 Middle School Leaders, after discussions took place within the SRC body, about the possibility of replacing Monte’s old bubblers. By installing new bubblers as ‘water stations’, Monte is reducing the need to purchase plastic water bottles, an ever-increasing problem for the environment. 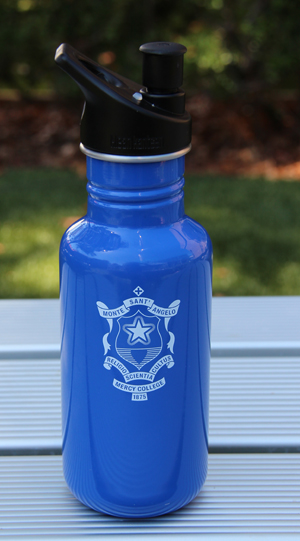 Since then, Monte has also designed and produced our own recyclable BPA free water bottle for students to purchase and refill at the water stations. Use of the bottle has been advocated to students as well as Monte teachers. Year 7 students are automatically given a bottle as part of their stationary kits, and teachers were given a Monte bottle as an end of year Christmas present.

A water meter system has also been implemented at Monte, with the current Green Team members regularly participating in monitoring the college’s monthly water consumption levels. On a particular note, the January/February report noted that the average water consumption for one Monte student was 40.71 litres, whereas the target usage per student was 10 litres. At present, the Green Team are discussing ways in order to further reduce the college’s carbon footprint- with the possibility of the installation of water tanks in the future.

As stewards of the earth, Monte students are playing an active role in promoting sustainability and raising awareness of environmental issues within the college and the wider community.