On 24 September 2015, Carol Rittner rsm was the facilitator at a high level seminar held at the United Nations in New York on the eve of the visit of Pope Francis to the UN. Organized by the World Bank, Caritas International, and the World Council of Churches, this a standing room only event brought together global religious leaders of faith-based NGOs in an attempt to affirm an Action Framework to End Extreme Poverty. 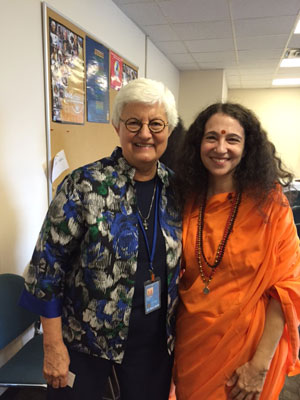 The Action Framework builds on the statement, “Ending Extreme Poverty: A Spiritual and Moral Imperative” (April 2015). The statement was drafted by a diverse group of multi-faith leaders heading up international NGOs. They worked collaboratively to identify and draw upon the shared moral commitments that unite their respective faith traditions to eliminate extreme poverty.

Recognizing that there has been remarkable progress in the past two decades in cutting in half the number of people living in extreme poverty, these religious leaders recognize that the moral test of any society is how the weakest and most vulnerable are treated.

The 24 September meeting included a strategy session as the assembled leaders recognized that ending extreme poverty will require a comprehensive approach that tackles its underlying causes: for example, preventable diseases, lack of access to quality education, joblessness, corruption, violent conflicts, and discrimination against women and ethnic minorities and other groups.

Attendees heard from the Secretary General of Caritas International, the head of Islamic Relief USA, the Director of UNICEF, several UN member States, and the Chief Officer of the World Bank as well as the Executive Director of the Parliament of World Religions, Jesuit Refugee Services and the Sarvodaya Shramadana Movement.

Going forward there will be an open invitation for additional input and involvement from a broad array of faith-based and religious organizations.