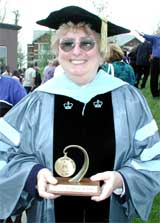 “We are proud to be conferring the first master’s degrees at this year’s ceremony. This represents yet another milestone in Mount Aloysius College history,” stated Sister Mary Ann Dillon, President of Mount Aloysius College. “We are fortunate to graduate so many well-prepared individuals. Their academic accomplishments and preparation will translate into career and life successes. This ceremony is not the end, but the beginning of our student’s education in life.”

The Commencement ceremony encompassed many highlights, from the enlightening words of commencement speaker, Archbishop Celestino Migliore, the Permanent Observer of the Holy See to the United Nations, to the inspiring speech to her fellow graduates by Ms. Lydia Dobrowolsky, of Portage, PA, who walked across the stage just minutes before to receive her bachelor’s degree in English.

Archbishop Migliore had dual roles as both commencement speaker and honorary degree recipient. In a position to influence world-shaping decisions as the Vatican’s ambassador to the United Nations in New York, Archbishop Migliore had these words for the graduates, “Today you are not concluding, nor ending, nor putting a final period to your studies. Rather, you are going to start or begin a new chapter in your lives… Remember the values and virtues imparted by your Catholic education at Mount Aloysius, and seek to use your voice as a means of spreading truth and love.”

Also receiving the honorary degree Doctor of Humane Letters was Dr. Warren D. Evans of Ebensburg, PA. Over the course of his 34 years as the former Director of Collegiate Approval and Research Unit for the Pennsylvania Department of Education, Dr. Evans helped to initiate 16 new private colleges within the Commonwealth and assisted in the change of status of 30 institutions, including Mount Aloysius. For ten years he simultaneously served as the Director of the Professional Standards and Practices Commission.

“Without his single-minded pursuit of excellence and his particular love of this College, Mount Aloysius might not have progressed as quickly as it has over the last two decades. It was under Dr. Evans’ wise guidance that the College was able to transition from a junior college to a comprehensive institution, and to be granted a charter change permitting the implementation of the College’s masters programs,” commented Sr. Dillon.

In addition, the Catherine McAuley Medal was presented to Sr. Cecelia Meighan, R.S.M., Ed. D., J.D., who served as president of Mount Aloysius from 1972-1976. Sr. Meighan, who is only the second person to be awarded this prestigious honor, currently serves as Director of the Institute of Law and Religious Life at College Misericordia, Dallas, PA. Among her achievements while serving at Mount Aloysius were the establishment of an institutional advancement office and the appointment of the first Director of Alumni Affairs.