On Earth Day 22 April, the Sisters of Mercy in New Zealand Launched their RIO + 20 flag at an Earth day Ritual at Papatuanuku Ki Taurangi Earth Promise Centre. This flag is being taken around to groups and ministries over the next weeks to draw attention and raise consciousness of the issues being discussed in Rio. Flyers were also prepared and are being distributed. 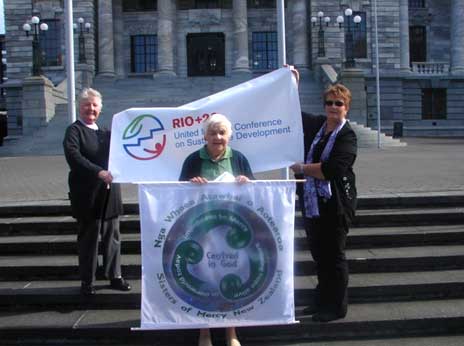 Katrina Fabish rsm who organised the Vigil said “it was important in getting RIO known as there has been no publicity here in New Zealand” Through the Vigil, the Sisters met with the key lobbyists for the Rio conference and were invited to their next meeting. “So now in NZ the government know Mercy are lobbying and are serious about Rio” said Katrina. “On our last day of Vigil we joined with a large Hikoi march to Parliament against selling off our assets and land, very much in support of indigenous people and against privatization. That was a micro version of Rio. The Mercies held our Mercy and Rio flag high”. 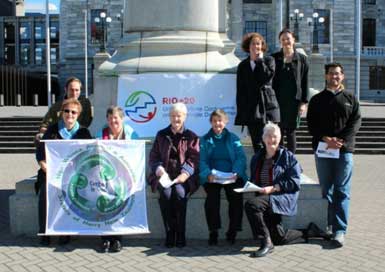 Sisters of Mercy, Caritas staff and others bear witness to the Rio +20 UN conference, on the road to sustainable development.


The Justice team in New Zealand has spent the last number of months educating their members about Rio and the issues that are relevant to New Zealand: Fracking, Mining , Fishing etc. Bridget Crisp, NZ Environment and Cosmology Group contact at MIA , presented a letter raising Mercy concerns for Rio + 20 to all Political Parties, UN representatives, Minister for Climate Change, Foreign Affairs and others. The letter was affirmed by all NZ sisters. The Ministry of Foreign Affairs contacted Katrina Fabish rsm in response to the letter and wished to meet with her. She had a good discussion with them and named Mercy concerns which they said they would look at. “The best news” says Katrina “is that when the delegation returns home from Rio they will give a Report and I have been invited to attend so am hoping that there will be an opportunity to raise Mercy issues”.