The annual gathering of the newer members in the Institute of Sisters of Mercy of Australia and Papua New Guinea was held at Goroka from Sunday 29 June till Friday 04 July. Seventeen Mercy women attended including eleven newer members from Australia and PNG together with those who are accompanying them on their Mercy journey. 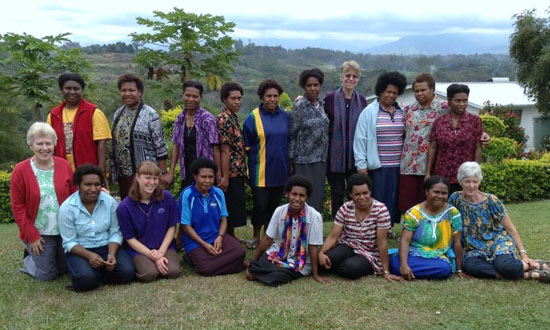 The program was co-ordinated by Joan Doyle, the Institute Director of Initial Formation, and had as its theme “Graced Difference” which was explored using the medium of story. Pat Fox rsm, a Mercy theologian from Adelaide, South Australia, gave some excellent sessions on the sources of the Story of God with special reference to the Trinity. Participants also had the opportunity to explore some of their own story and faith journey in the autobiographical sessions conducted by Srs Margaret Roni, Philomena Waira, Desma Clarke and Joan Doyle based on material from the three week workshop with George Billota at Wangi Wangi, NSW, last March. Other sessions led by the formation team included a reflective powerpoint on “Cultivating Openness of Heart,” journaling techniques and an affirmation session. Srs Elizabeth Young and Desma Clarke also shared their reflections and experience of ministering in the Curtin Detention Centre in Western Australia.

Each day began with Tai-Chi and prayer. In the evenings participants viewed some challenging and inspiring stories: 'Girl Rising' (the stories of nine girls from developing countries who are struggling against many obstacles to get an education), 'Pawa Meri' /Woman Power (stories of six Papuan New Guinean women who have taken initiatives to make a difference in their own communities) and 'A Mercy Story in Peru' (the North Sydney mission in Lima, Peru).

The gathering concluded with an affirmation session and closing ritual.

All who attended were grateful to Sr Berneice Loch and the Institute Leadership Team for the opportunity to be together and left the gathering with a greater appreciation of the gift of one another as Sisters of Mercy of Australia and Papua New Guinea and our call to live in communion with one another and with all of creation.