The final three days of the annual meeting of the members of the MIA took place from Friday 18th May to Monday 21st May. With a very tight schedule, they were kept busy from morning to late afternoon on each of these days. 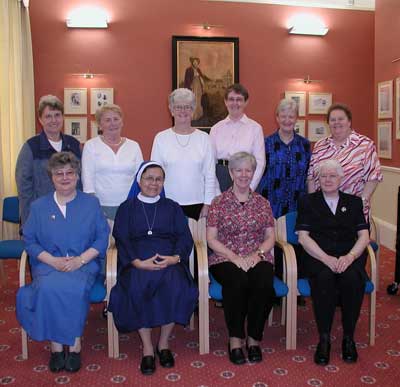 Members of the Mercy International Association (MIA) and staff of the Mercy International Centre (MIC) were treated to a musical feast of organ music on Sunday 20th May in our chapel. The organist, Gerard Gillen, who is professor of Music at Maynooth, has given organ recitals all over the world and plays regularly at the pro-Cathedral here in Dublin. This recital at MIC had been organised by the MIC Board for the MIA members.

As well as music from some of the great composers such as Bach, Handel, and Dvorak, he incorporated into the recital pieces from the different countries represented by his audience. One which delighted the Australian and New Zealand members was his own composition into which he wove the Waltzing Matilda theme and the New Zealand National anthem. He concluded the recital with a rendition of “Amazing Grace” which he dedicated to Sister Nancy Whitley (Rochester, New York), who had been instrumental in organising funds to refurbish the organ in 1998. The organ, which was purchased for the Baggot Street house in 1844, came from an organ building business, founded in Dublin by William Telford in 1830. Organs from this business later became famous in countries as far afield as Australia and New Zealand. 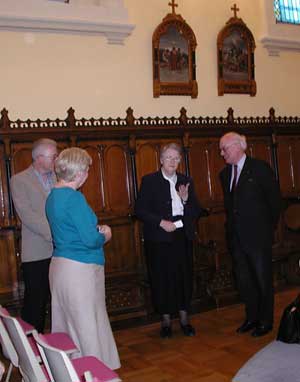 Professor Gerard Gillen (right) speaking with MIC Board members, Sr Margherita Rock (President) and Brendan Delaney, and Sr Coirle McCarthy, Leader of the Congregation of the Sisters of Mercy, Ireland.

Singing a Song for their Supper!

A Choral group of 39 students from Mercyhurst College, Erie, PA, accompanied by their choral director, Ms Rebecca Ryan, were recent visitors to the Mercy International Centre. Following their tour, they sang unaccompanied, some songs in the Chapel for staff of the Centre, who were delighted with their presentation. 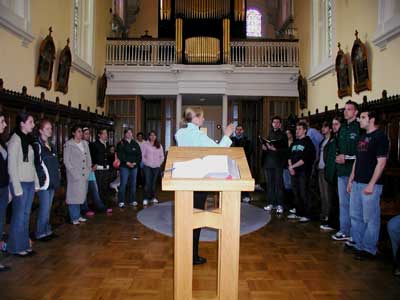