Nuns of the Battlefield are Remembered in Washington, D.C.

The decades immediately after the Civil War saw a host of new memorials rise up across the district. Statues, markers, streets, parks, and traffic islands were duly named after Civil War politicians and generals - from the winning side, of course. Some of them, such as Farragut Square, are well known, while others are almost forgotten.

One of the largely forgotten memorials involves neither politicians nor generals - the Nuns of the Battlefield Memorial at M Street and Rhode Island Avenue, NW, a small triangle of federal parkland about three blocks north of Farragut Square, just opposite Saint Matthew Cathedral. It honors 12 religious orders whose sisters served as nurses at Civil War battlefields and hospitals. 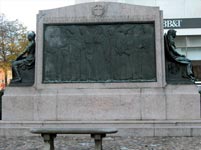 The idea originated in 1914 with the Auxiliary of the Ancient Order of Hibernians. Ellen Ryan Jolly was the national president and made the proposal at the national Hibernian convention in Norfolk, Virginia on July 14, 1914. The Auxiliary successfully lobbied Ambrose Kennedy, a congressman from Rhode Island, to introduce a joint resolution in the House of Representatives on September 17, 1917. Senator John Wingate Weeks (later Secretary of War under Presidents Warren Harding and Calvin Coolidge) oversaw it in the U.S. Senate. The House passed it on March 18, 1918, and the Senate on March 20.

The auxiliary hired a sculptor, Jerome O’Connor, who spent several years on the work. The result was a panel rising from a plaza, both of Stony Creek granite. Overall, the memorial is 20 feet long and 14 feet high. Two allegorical figures are seated at each end: “The Angel of Peace” and “Patriotism.” The front of the panel is a large bronze plate, showing in bas-relief the 12 orders of Roman Catholic sisters who served in the Civil War. 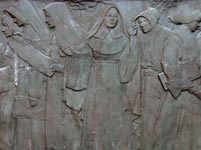 The unveiling, performed by Jolly, was held on a Saturday afternoon in September, 1924. Nearly 6000 people crowded into the small park. Archbishop Michael J. Curley and Lieutenant Colonel C.O. Sherrill, the official in charge of memorials and monuments, were among those present. Sherrill expressed his regrets that none of the surviving Civil War sisters was present. Then an elderly lady slowly walked forward - Sister M. Madeline O’Connor, a Sister of Mercy then 81, and one of the three surviving wartime sisters. Jolly led her to the platform.

The nun was greeted with cheers, applause, and even bows from officials and the audience alike. As the Washington Post phrased it, “The eyes of Sister Madeline were not the only eyes in that vast throng which glistened with tears.”

Reprinted with permission from Living Mercy, a magazine of the Sisters of Mercy of the Americas. Summer 2004 (vol.7 no.2)