On the Occasion of the G20 Summit in Australia

On 15 and 16 November the Heads of State and Government of the world’s twenty largest economies, known as the G20, will meet in Brisbane, Australia. 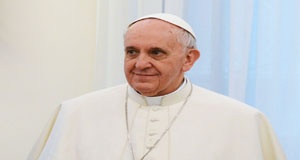 Pope Francis has sent a letter to the Honourable Tony Abbott, Prime Minister of Australia, who will chair the Summit, asking the G20 Heads of State and Government 'not to forget that many lives are at stake behind these political and technical discussions'.

In his letter Pope Francis recounts the challenges facing humanity and the earth community in asking the leaders to be 'examples of generosity and solidarity' and to remember in their decision-making their 'responsibility for the poor and marginalized'.

Read: Letter of His Holiness Pope Francis to the Prime Minister of Australia on the Occasion of the G20 Summit

Let us pray that the key messages of the Pope's letter will be heeded during the deliberations of the Summit and will be reflected in its outcomes.