For Sisters of Mercy and partners-in-Mercy, the commencement of the Year of Mercy on 8 December has been marked by local Mercy door openings, by praying Pope Francis' prayer for Earth/Oración por nuestra Tierra between midday and 2pm in the 44 countries where Sisters serve, thus encircling the globe in prayer, and by the commencement of the Mercy International Reflection Process.

First responses are below. Send us your response and images for posting on the website.
Email: mercyenews@mercyinternational.ie

To celebrate 'Year of Mercy 2015/16' in our Parish, Fifth Year Religion and Art students from Mercy Secondary School, Tuam, Co. Galway designed and painted a lintel for over the 'Doorway of Mercy,' to be displayed in Tuam Cathedral for the duration of the coming year.

Fr. Pat Farragher visited our class today to thank the artists for their hard work and complimented them on the beautiful lintel they created.

We look forward to seeing it in situ in the Cathedral later this week. 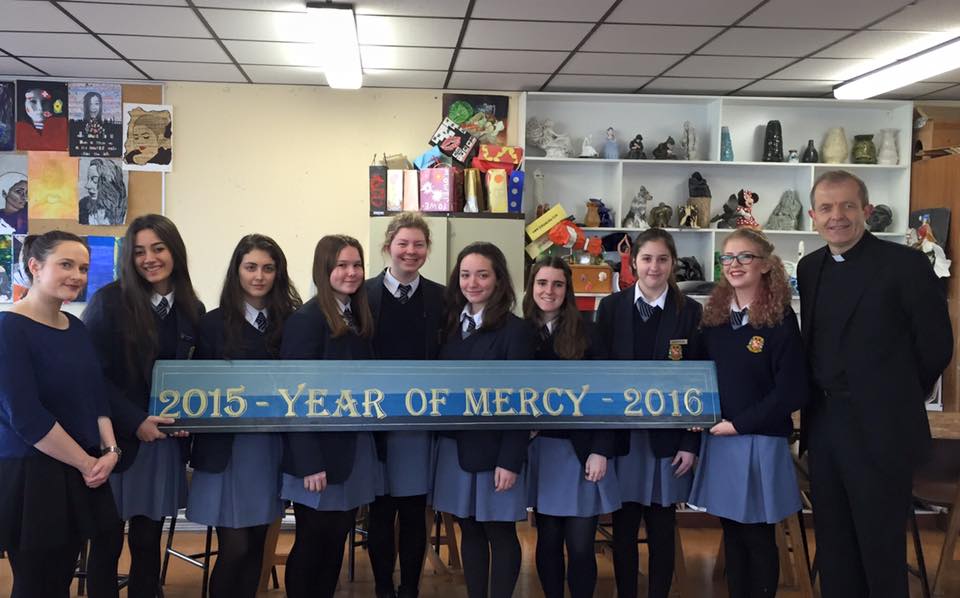 The Holy Door of Mercy of the Archdiocese of St. John’s, Newfoundland and Labrador was opened at the Eucharistic Liturgy celebrating Mary, December 8 at 7:00 p.m. Archbishop Martin Currie knocked on the door with the request that it be opened. Many priests, Archbisbop Emeritus, Alphonsus Penney, men, women, youth and children participated in the celebration. Sister Rosemary Ryan was server and Elizabeth Marrie did the second reading.

The Holy Door faces the Gathering Place, a ministry of the Presentation and Mercy Sisters established for the poor, homeless and others seeking nourishment of body, mind and spirit, and those calling forth a response mandated by the corporal and spiritual works of mercy. The Holy door also looks out over the entrance to St. John’s Harbour and the hills surrounding the city – the beauty of nature in its majesty and simplicity. It is through this harbour that the first three Sisters of Mercy, Ursula Frayne, Rose Lynch and Francis Creedon, arrived from Baggot Street on June 3, 1842. 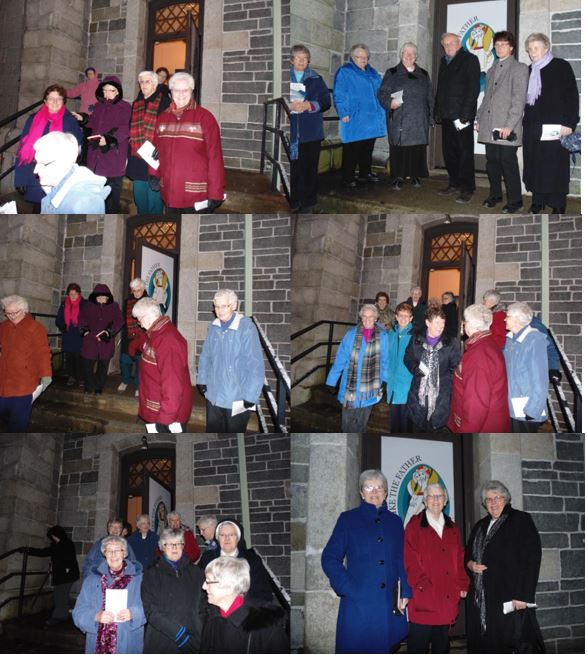 On Tuesday 8th December the OLMC Parramatta Doors of Mercy were opened. These special doors were built as a replica of the Doors of Catherine McAuley's House of Mercy in Baggot St Dublin. Stephen Walsh the Principal of OLMC has invited the OLMC community to join him in walking through our doors of Mercy and make 2016 a year when we continue to 'make Mercy a verb'

Today,  December 8 at 12: 00 - 1:30 pm, I had a meeting with a committee on which I represent our Congregation, an interfaith group, a local branch of the world Council of Churches in Canada . I had a moment to explain the Jubilee Year, Mercy International Reflection Process and to pray the Prayer for the Earth. The attached is a photo of the group - it is posed so we could get the whole group in the photo! 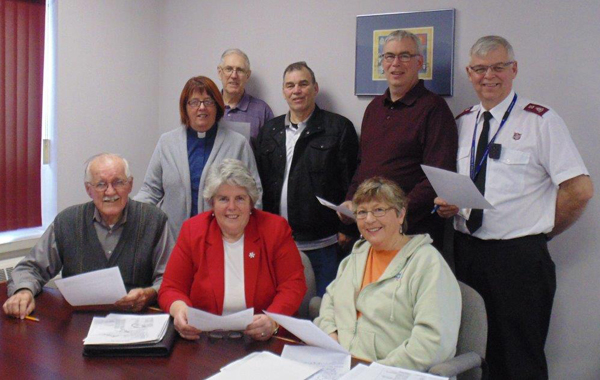 Our little community prayed the prayer for the earth at 1.30pm, as grace before our dinner. We attended Mass this morning in a Carmelite church and the priest gave a lovely introduction to the Year of Mercy. I wanted to shout "We three are Sisters of Mercy!!" I didn't!

We have launched the Jubilee Year of Mercy with the Mercy International Reflection Process at 12:30 p.m. (after our midday meal) today in a very simple manner. Sr. Raphael and I coordinated/facilitated it. The coincidence between Jubilee Year of Mercy and MIRP is a gift of God, indeed.
Blessings,
Carmela

I’ve just come from the Auckland celebration of the inauguration of the Year of Mercy and the Opening of the Door – I found it quite moving and was imagining Catherine being amazed at what has come of her vision at the ends of the earth [next stop Antarctica)—the Maori and Pacific and the other multi-cultural faces of mercy were so visible. And the year was inaugurated and MIRP found a mention. I feel a real sense of blessing already outpouring as I think of groups of mercies and others opening doors, inaugurating the Year of Mercy and praying the prayer of Laudato Si’.

Just thought I’d catch you up in this as we would be one of the first groups on this day, 8 Dec, to open the door on the Year of Mercy. 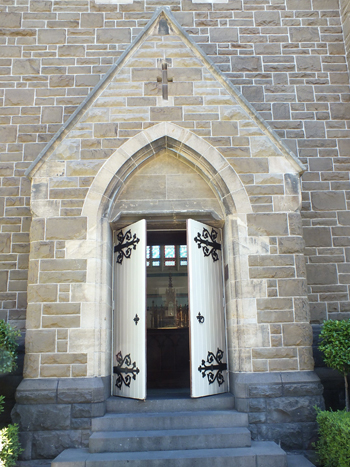 We have opened the main doors of our chapel today, (the Ursula Frayne chapel built in her memory), in union with Pope Francis and the whole church and Mercy world because staff are still here and it is Year 7 Orientation Day so our newest students can have an understanding of the year.

In February next year, when the school year recommences, we will have a whole school celebration of the Opening of our doors. 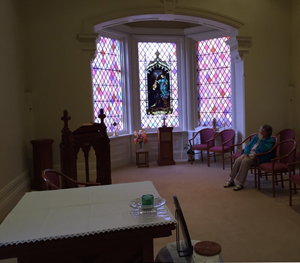 I am sharing with everyone a little account of our local launch of the Jubilee of Mercy while it is still very fresh in my mind and before I have to move on to the next thing. I would love to hear what others have done.

We had 51 people at Mass in the Emmaus Chapel this morning to mark the beginning of the Year of Mercy (Sisters, Associates and local Parishioners}. We reflected on today’s gospel about Mary of Nazareth as a highly favoured/mercied woman who brought mercy into the world. We prayed mercy prayers and mercy songs.

After Mass, I alerted those present to the MIRP information on www.mercyworld.org. I invited them to open doors wherever they are next Sunday and drew attention to both the prepared ritual and Mary Wickham’s poem. I gave a very brief outline of the four stage process and offered an invitation to anyone wanting to join it. I had copies of the calendar, the pope’s prayer for the earth and of Mary’s poem for those who have no access to the web. Finally Berenice Kerr, our Community Leader, introduced them to the pilgrimage theme and placed a wooden finger labyrinth on a table in front of the altar with an invitation for people to wander into the chapel at any time during this Jubilee of Mercy and take a journey to the heart of mercy.

It was so heartening to sense the interest that so many people seem to have in taking this time to work together towards a more compassionate way of being in the world. I think a key element of the whole process is that we are taking time to deepen our understanding of the issues and to bring them into dialogue with our wisdom tradition rather than jumping unreflectively from need to action. Groups are forming for Sunday’s opening of doors in diverse venues. For one group, it has turned into a Devonshire tea party.

We have another session in the parish hall this evening, this time a parish event to launch the Year of Mercy and an opportunity to invite parishioners into the process. I expect another 50 or so at that-so it has all begun in this little neck of the woods, by the grace of God! As ours has been a mercy connected parish since 1881, the interest in linking with our process is hardly surprising. 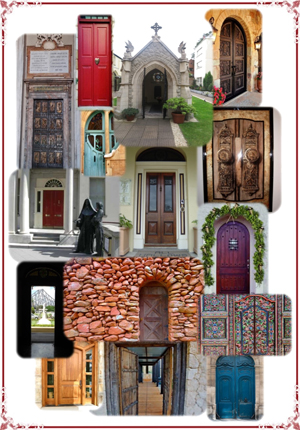 On 5 December, 92 Sisters from the Brisbane Congregation gathered at Mercy Place, Bardon for our annual Advent Ritual.

This year our ritual included 'Opening the Door' for the year of Mercy and accepting the invitation to participate in the Mercy International Reflection Process. The front cover of the ritual booklet featured many doors including the red door of Baggot Street and All Hallows Convent door – our foundation house.