At our 2010 Chapter, we were called to live Whanaungatanga – to make right relationship with “God, with God’s people and the relationships of God’s people with one another and with creation” (See article Whanaungatanga by Kathleen Rushton rsm). In planning for the Opening of the Mercy Door ceremonies in Aotearoa New Zealand, the coordinators first sat with members of Te Kahui Pou, the Maori Advisory Group to our Congregation, Nga Whaea Atawhai o Aotearoa Sisters of Mercy New Zealand. This was to honour our partnership with Maori and to discuss the ritual together from the very beginning of our planning. Therefore, it was not a matter in inserting cultural dimensions into a ritual already created, but was a sharing of ideas around the table from the start.

When Maori language is used in documents it is not a matter of merely translating words from English into Te Reo Maori (Maori language). For Maori that would result in a ‘dead’ document that would fail to capture the life and spirit of the language and culture. For Maori, the translation of words, or rather concepts, has a spiritual dimension and must speak to Te Ao Maori (the Maori world view) and speak to the heart. The language itself has a wairua (spirit) of its own. It is a taonga (treasure) that has been handed down to the present day through the minds and hearts of the tipuna (ancestors). Therefore, what is conveyed needs to be felt and spoken in a way that honours what it means to be Maori and in accord with how it has been handed down to them.

The ritual to Open the Door of Mercy in Aotearoa New Zealand took place in four centres on 8 December. A significant door was opened in each area – the doors to an historic Chapel in Auckland, the doors to the Gabriel Hall at St Mary’s College in Wellington, the door to Mercy House in Christchurch and the door to McAuley House in Dunedin, the two latter doors into community dwellings where some of our wisdom sisters reside. Each ceremony began with a Karanga - a call. Our Maori advisers likened the opening of doors into the Year of Mercy as a journey of transformation, where we were summoned by Karanga through the doors towards Te Ao Marama, a state of enlightenment within the grace of Mercy. We spoke with our local Maori partners in each area as local Maori have their own customs and ways of performing the karanga.

During the ritual several extracts from Misericordiae Vultus and Laudato Si’ were read. As they were proclaimed the two documents were processed to the focal point, as well as ‘oil of consolation’ and bandages, symbolising binding and healing the wounds of Earth and the poor with mercy. Lastly a globe representing Earth was placed on the focus. We lit the candle and prayed the Prayer for the Earth, beginning the process of the wrapping of Earth in prayer for 24 hours around the world. Through these rituals we were immersed in Mercy and called to be Mercy in our world and to reach out in response to te Tangi a Papatuanuku me te Tangi a te Hunga Rawakore – the cry of the Earth and the cry of the Poor. 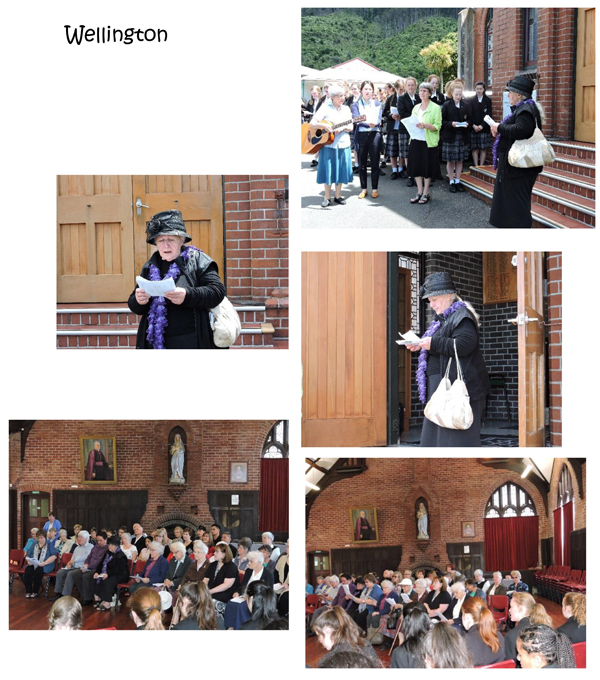 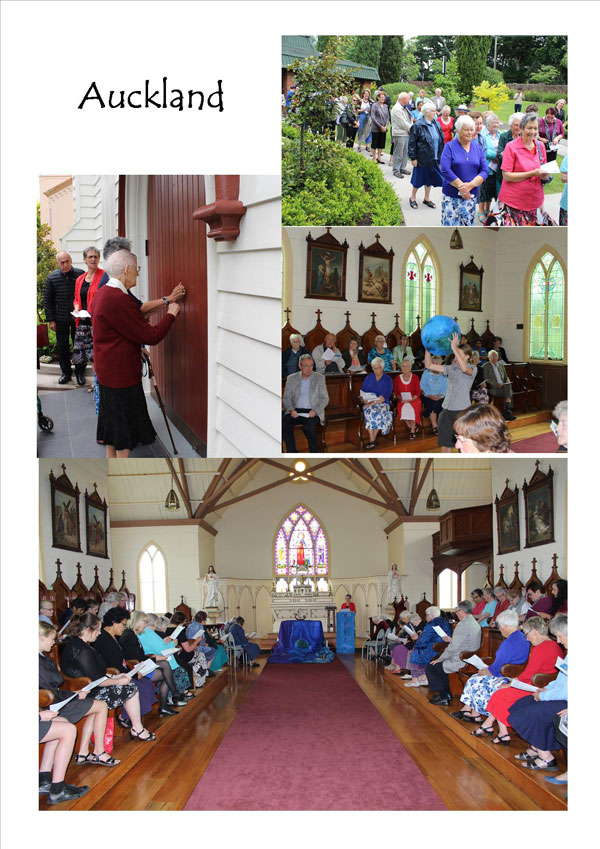 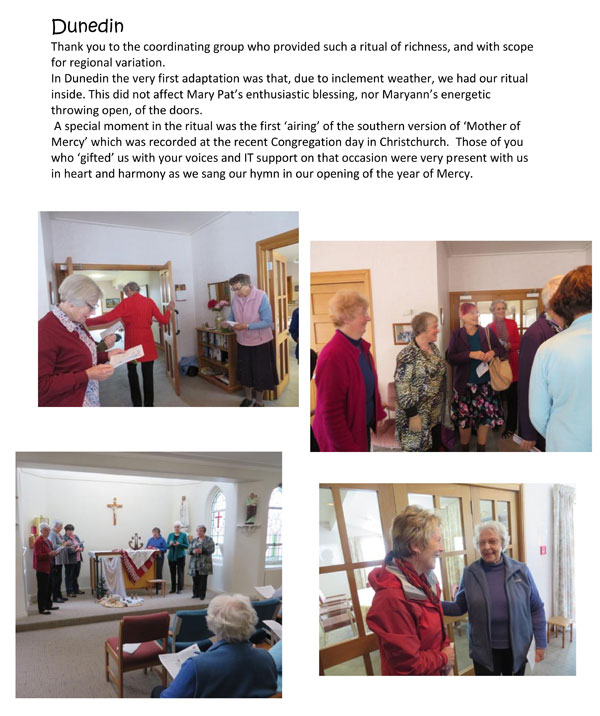 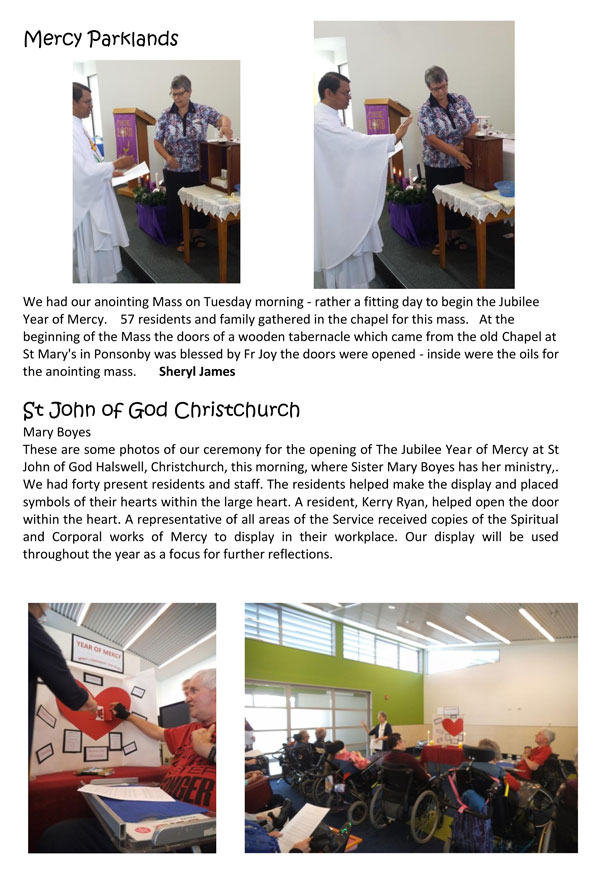 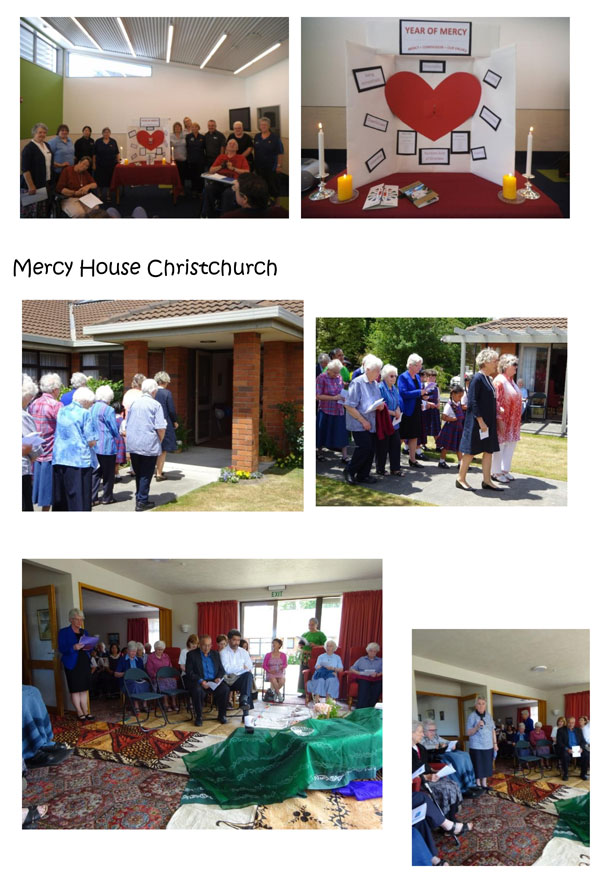