Opening of the Door of Mercy International Centre

Over 120 people braved the elements to travel from the four corners of Ireland for the opening of the Door of Mercy at Baggot Street on Sunday, 13 December. 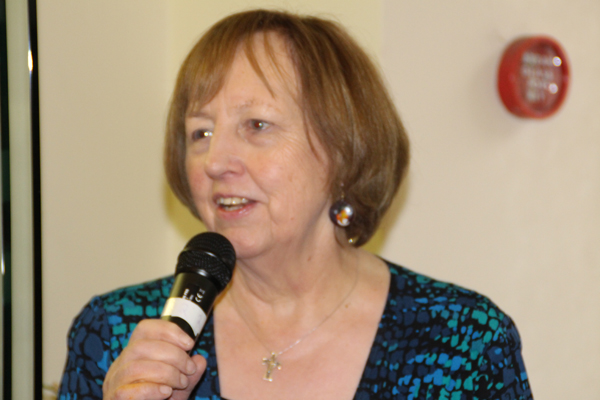 The crowd, as they lined the corridor and front hall, were welcomed by Mary Reynolds, rsm, who reminded them that as we enter the darkest days of the year in the northern hemisphere, we are celebrating the great light of God’s mercy and committing ourselves to bring that light into the dark places of our world and its peoples. 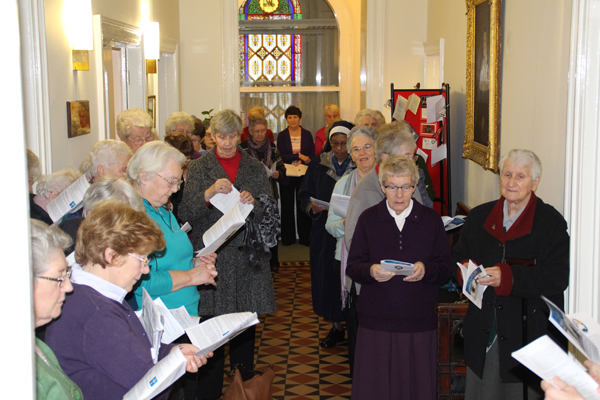 The words of the Opening hymn ‘Pour Out Compassion and Mercy’ picked up this theme.

Then there was the solemn proclamation of the Jubilee Year of mercy, as announced by Pope Francis in Misericordiae Vultus. It was an awesome moment, standing by the door of the first House of Mercy to hear the words: With sentiments of gratitude for all we have received, and with a sense of responsibility for the task ahead, we will cross the threshold of the Holy Door fully confident that the strength of the Risen Lord, who constantly supports us on our pilgrim way, will sustain us.

In song the chant ‘I Stand at the Door and Knock', composed by Sheila Carney, rsm accompanied a knocking three times on the familiar red door. To the question ‘Who knocks on this Door of Mercy’, responses came naming those who suffer in our world today, the needy within our church, our congregation, our local realities and our exploited earth itself. It was then time to cross the threshold. This took the form of a procession across the threshold of the chapel door. The connection between procession and pilgrimage was highlighted and the wish that pilgrimage would be an impetus to conversion as we prayed ‘By crossing the threshold of the Holy Door may we find the strength to embrace God’s mercy and dedicate ourselves to being merciful with others, as the Father has been with us'. In this context, the singing of Circle of Mercy sounded like a programme for action to do just that.

Once the assembly had gathered in the chapel, the Liturgy of the Word took place. In a very challenging reading from Misericordiae Vultus, we were invited to open our eyes and see the misery of the world, the wounds of our brothers and sisters, who are denied their dignity and to recognise that we are compelled to heed their cry for help The ongoing challenge of this invitation took deeper root in our hearts as we responded with the hymn composed by Cynthia Serjak rsm 'What Mercy May Yet Be'. The second reading taken from the words of Johanna Regan rsm brought before us the example of Catherine who translated the mercy of God to others. We were reminded that she somehow grasped intuitively that mercy is gift given in response to need; neither earned nor deserved ....She knew that rendering the merciful service was not an act of beneficence, but one of gratitude to God for mercy received. The wonderful Gospel Reading from Matthew 25, announced, as Catherine often quoted that ‘In so far as you did this to one of my least brothers and sisters, you did it to me’.

Mary Kay Dobrovolny rsm then broke open the word of God. In her reflection (full text linked), she referred to the practise of the ‘soft eyes’, found in the Japanese art of Aikido. To look at the world with soft eyes means that we widen our vision to take in more of the periphery, to see more of the world including most especially that which is on the fringes. 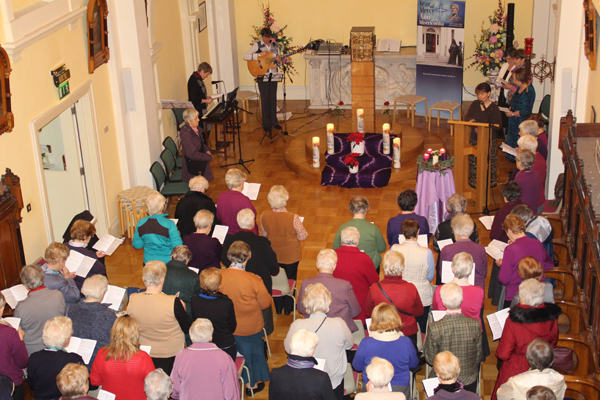 Then followed a ceremony of commitment to Mercy. Each person was invited to become a doorkeeper of the door of Mercy during the coming year – promising to invite Mercy to come in to be with us; holding wide the door to invite those who are hungry, thirsty, imprisoned, sick, strangers or naked to come in to find Mercy; finding new ways of being Mercy on an Earth and among a people crying out for justice; and guiding us into a holy place of contemplation and vision.

Then followed a Renewal of Vows made by the Sisters and a promise of commitment to Mercy made by the Partners in Mercy present. Catherine’s Suscipe was a fitting summation to this commitment.

In the prayers of intercession, many needs of the world and its peoples were held up to God and we prayed that in the face of these need we might be signs of God’s Mercy. We prayed in conclusion that each time we cross the threshold of the Holy Door, may we be reminded that we are indeed called to the ministry of Mercy and that in this Holy Year God will strengthen our resolve to work for the transformation of our world to a place where all know themselves to be blessed and welcomed.

All were then sent forth with a beautiful Irish Blessing:
May the light of the Lord shine from your eyes like a candle in the window, welcoming the weary traveller.......
As you walk the roads may you always have a kind word for those you meet....
May your heart glow with warmth like a turf fire that welcomes friends and strangers alike...

Everyone who contributed to a very meaningful ritual was thanked, especially the musicians, Marie Cox rsm (Northern Province, Ireland) and Úna Purcell, rsm (Western Province, Ireland ) and all enjoyed a ‘good cup of tea’ with some seasonal treats afterwards in the dining room.

There was a palpable joy and appreciation among the guests of the gift of Mercy which we have received and the privilege and responsibility that is ours in opening wide the Doors of Mercy to share that gift with our world, especially those most in need of God’s compassion today.