The Organ in the chapel is a very precious part of the heritage of Mercy International Centre. Built in 1844 by William Telford, a leading nineteenth century organ builder, it was added to over the succeeding decades.

After a century of service, it was in need of serious repair but this proved very difficult. This led to a decision to alter its mechanism but fortunately the original console of 1844 was left untouched and this made possible the re-construction of the organ in 1998.

Since then, Organ music has again enhances liturgies and delighted audiences at MIC. Young student organists often come to play on it in order to perfect their skills. Catherine, who loved music, would no doubt be pleased.

An Organ committee was established to ensure the use and care of the Organ. Last year, in order to honour Catherine and to promote Organ music, the Committee members decided to offer a Perpetual trophy and annual cash prize of €500 in the Dublin Feis Ceoil (Festival of Music) competition .This is a prestigious competition which attracts competitors of a high calibre.

On March 20th, the award was made for the first time. The recipient, Aaron Marchant is a talented young Organist who is completing his post graduate studies in Organ Music. He is a great grand nephew of a renowned organist at the St. Patrick’s Cathedral, Dublin, whose work is often referred to in the history of music in Ireland and beyond. The early signs are that the young Aaron may one day attract similar notice.. Our hope is that this award will be an encouragement to him on the way. Aaron is delighted with our invitation to him to provide organ recitals at MIC. 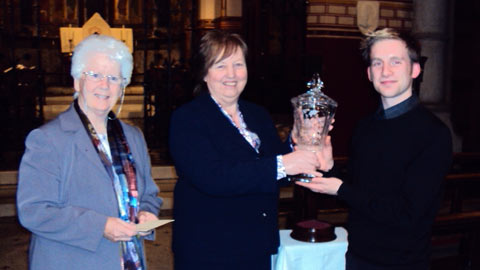