Our Experience as Volunteers at Mercy International Centre (MIA)

We have been blessed this year with international volunteers in addition to our marvellous regular local volunteers. In the article below, Maureen & Tom Smyth have provided a description of their time here and their reflections on that experience.

Maureen and I first saw the advertisement asking for volunteers at the Mercy International Centre (MIC) in Dublin last year while we were travelling around Australia. Initially we thought that it may have only applied to sisters, but Sr Sylvia Williams, in Dublin assured us that lay people would be most welcome. So we decided to offer our services for two months in 2012 - from late April to the end of June and combine our Dublin experience with some travel in the UK and Europe.

We were made most welcome on our arrival at the MIC. Sylvia picked us up from the airport on a wet and cold Dublin night. We were given a lovely room overlooking Baggot St and were told we had a few days to settle in before the work began. Over those few days we met the staff, became familiar with the surroundings and had a chance to do a little exploring in Dublin. The staff were very welcoming and helpful. Sr Joan Breen, a Sister of Mercy from England, was also volunteering and it was good to have someone in a similar position to ourselves who could “explain the ropes.” 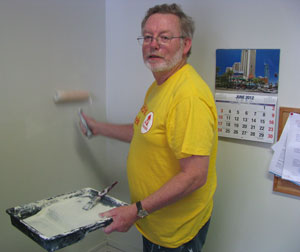 Our duties were not terribly onerous. We assisted the permanent staff with the housekeeping, setting up for meals, serving meals and answering the phone. When guests arrived we would show them to their rooms and help them get acclimatised. Maureen relieved on the reception desk and entered data for Sr Mary Kay Dobrovolny. She would occasionally look after the small shop that sells books and other items connected to the Mercy world. Tom spent a significant amount of his time painting, doing minor repairs on appliances and constructing some shelving for the shop. We would also be rostered on for night duty a few nights each week. This involved locking up the building and being available to answer questions from guests. In two months I think our services were called upon once to assist a guest!

Sylvia gave each person a weekly roster which outlined that week’s duties. We were given breaks of three to four days every ten days which enabled us to head off and see some of the sights of Ireland. During our stay we managed to visit family regularly and had extended trips to Cork and the Ring of Kerry, to Galway, Donegal, Meath and Cavan. Dublin was a fantastic base to see the rest of Ireland. On evenings or mornings when we were not rostered on we could explore Dublin.

The two months disappeared very quickly and we were very sad to leave at the end of June. On reflection MIC may have gained a little from our presence but we came away having benefitted greatly from the experience. We met wonderful people involved in the works of Mercy from around the world, our knowledge of, and appreciation for, the Mercy story has increased markedly, we have had time to explore Ireland over two months and we have made many friends.

Thank you to the team at MIC, Srs Mary Reynolds, Sylvia Williams and Mary Kay Dobrovolny who made us so welcome and gave us the opportunity to experience life at 64A Lower Baggot Street. Thank you to the staff who were so helpful and made our stay so enjoyable.

Many responses were received following our advertisement in E-news during May for volunteers At this stage we have volunteers in place from August this year to July 2013 and February to July in 2014. These volunteers come from USA, UK and Australia.

Vacancies exist for individuals or couples for two months or longer in 2013 and 2014 as follows: June, July, August, September, October, November, early December.