Our Name is Mercy; Our Spirit is Compassion

The Congregation of the Sisters of Mercy of Newfoundland is pleased to have been part of a Public Symposium on the History of Irish Roman Catholicism in Newfoundland sponsored by the Roman Catholic Archdiocese of St. John's and the Canadian Catholic Historical Association, September 8-10, 2005. The symposium was one of a number of events that were scheduled to celebrate the 150th Anniversary of the Consecration of the Basilica-Cathedral of St. John the Baptist. 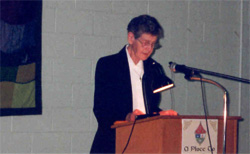 The symposium consisted of six sessions, one of which was titled "Perspectives on Catholicism". One of the presenters for this specific session was Sister Kathrine Bellamy, presenting on the story of Mercy in Newfoundland, the first foundation of Mercy in the New World. Taking as her theme "Our Name is Mercy; Our Spirit is Compassion", Sister Kathrine traced the story of the Sisters of Mercy in Newfoundland, beginning with the invitation of Bishop Michael Anthony Fleming to Catherine McAuley to found a mission in St. John's. She continued to describe, with relevant slides, the efforts of the sisters during the early years to establish the foundation, and the amazing growth of the Congregation until it encompassed the whole of the province, including Labrador, and Peru.

This was Sister Kathrine's second presentation during the year, her first one having been in June, when she told the story of Sister Francis Creedon who with other sisters would have witnessed the construction of the Cathedral over fifteen years. The corner stone of the Cathedral was laid in 1841, one year before the founding of the Newfoundland mission; its consecration, in 1855, took place merely seven weeks following the death of our beloved Sister Francis Creedon.