Our Wish for Them is a Future Full of Hope: Mamre Refugee Programme

In 2003 Mamre House at St Marys in outer Western Sydney was invited to join a coalition of partners to provide vital services to newly arrived Southern Sudanese refugee families. This year marks the tenth anniversary of a new era of Mercy given and received, when refugees not only from South Sudan, but also Burma, Bhutan and other African nations find themselves in a welcoming, empowering community. 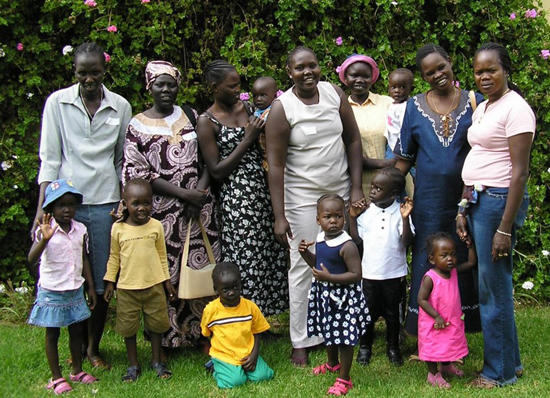 The beginnings of the Mamre House Refugee programme emanated from a need in the community where Southern Sudanese refugees found affordable accommodation in an area of Sydney without any infrastructure to support them. The women were most at risk of becoming isolated because of lack of English language, transport and childcare. The 500 hours of English tutoring given by the Government was totally insufficient for women who were not literate in their own language, had no opportunity for schooling and were therefore pre-literate when they arrived mostly from refugee camps in Egypt. Here they had learnt to speak Arabic but had no written language. They usually had several pre-school age children which limited their access to any educational opportunities.

Mamre House was asked to provide a classroom, bus transport, a crèche for the children and volunteer teachers, carers and drivers. There was a classroom available one day a week, a small bus for transport but no crèche. The Mamre staff vacated the staff room a day a week (with all the furniture) for two years to allow for a crèche so that the children could be minded while the mothers learnt English and were given input on health and dietary issues facing them in Australia. There was no funding and other partners supplied an English teacher, health professionals, vocational training opportunities and settlement services. This was a very primitive beginning to the programme but the look on the women’s faces when they came spoke enormously of their simple needs – a place of inclusion, safety, care and learning where they could start to rebuild their greatest gift – community.

The limitations of this arrangement quickly became apparent - English for two hours a week was of little benefit. There was an old barn on the property and the local community was invited to assist in the refurbishment of it to make a refugee training centre. Even the local Member of Parliament joined in by appearing on the TV show, Dancing on Ice, and raised $60,000 towards the building.

In 2006 the training centre and crèche were opened. On this day the symbol used was a plate. This was because the families told us that when they arrived in Australia it was as though they were carrying a very heavy plate and theirs were the only hands holding it which made it unbalanced. But when we entered their lives it was as though all the extra hands made the plate stable and easy to carry.

This building allowed the women to have classes four days a week in English language, vocational training, health and life and parenting in Australia skills. The children had a proper preschool program to enable them to commence school with the same skills as other children. The men were provided with computer skills and other vocational training in the evening and each family was given a computer.

Sister Janet Woods became the co-ordinator of the new training centre and five English classes grouped according to ability were introduced. Janet started a homework group for infants students and a home tutoring service for secondary students. She worked with the women in all aspects of their lives, bringing them the calmness, care, sensitivity and security of their elders who had either died in the war or who were still in South Sudan. She assisted with their citizenship studies and to gain their driver’s licence.
Today the programme has grown to include refugees from other countries. Many have taken up plots of land on site and grow vegetables from their own countries which they sell to their communities. Many of the men and women have been able to find employment and are able to sustain their families. Others are at Mamre participating in either Hospitality or Business certificates.

Mamre runs two social enterprises where the refugees are able to earn an income. The Pop-Up Café is designed to engage refugees to teach students, people with a disability and volunteers how to cook a meal from their country of origin and serve it to paying customers.

The purpose of the project is to increase the engagement, confidence and employability of the refugees. Global Gifts is designed to bring together refugees & migrants, people with a disability and volunteers to work together in the making, marketing & selling of social enterprise products such jams & preserves.

While all of the above has been given, what has been received is the greatest gift. The refugees have taught the real and deep meaning of resilience, of hope against hope, of the value of community and the spontaneity of joy. They have invited us into their cultures, families and entrusted us with the deep pain of their experiences. We hold all this as sacred. Our wish for them is a Future Full of Hope.

The following short video introduces the Farming Community Engagement Manager at Mamre Farm, Steve Flesischmann, who describes some of the programmes at Mamre and how the SITA grant will assist with  (02:30)