In October 2015,  Áine O’Connor rsm and I visited members of the Mercy Family in Australia and saw their work for justice in Queensland. Srs Margaret Endicott and Deirdre Gardiner (ISMAPNG) arranged for us to meet Community Leader Ms. Shay Dougall of Chinchilla in the Hopeland area of the Western Downs. Here we heard firsthand the concerns and challenges the residents were facing, related to the unconventional mining or fracking, of coal seam gas (CSG). 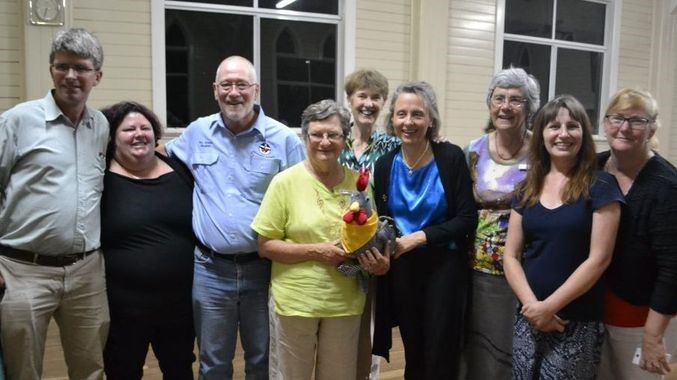 Listening to the health and social consequences suffered by those living close to the gas wells, many sited on rich, agricultural land; plus their concerns about the environment including water pollution, it became obvious that it was a human rights issue. The detrimental impact on the health of the children in the area was particularly worrying. We heard about the community’s extraordinary efforts to protect the air, land and water from the permanent damage CSG mining is causing. On hearing all this, we brainstormed with Shay and her group plus some key activists, on how these critical issues could be addressed. Attempts to effect change through dialogue with the mining companies and the Queensland Government, appeared to have fallen on deaf ears! One suggestion the group took up, was the possibility of gaining international attention for their situation, through participation in a Permanent People’s Tribunal (PPT).

The PPT based in Rome, is an internationally recognized tribunal of Civil Society that focuses on hearing public opinion on specific issues. It functions independently of state authorities thereby guaranteeing everyone involved freedom of expression. The PPT is a descendant of the 1967 Bertrand Russell-Jean Paul Sartre Vietnam War Crimes Tribunal, designed to hear cases where prima facie evidence indicates a violation of the basic rights of ordinary people. Furnished with all the details about the PPT process, Shay Dougall and a hardworking group of activists went to work.

Linking with citizens across Australia, now nearly three years later all is in place for the upcoming session of the Permanent Peoples' Tribunal on ‘Human Rights, Fracking and Climate Change’ to be held May 14-18. It will be co-hosted through the Spring Creek Project at Oregon State University and will be breaking ground on a number of issues. For the first time in the 40 year history of the PPT, the proceedings will be hosted completely online. The session will have an international focus and in addition to focussing on the rights of people, this PPT hearing, will include arguments for the rights of nature.

According to Tom Kerns, Director of Environment and Human Rights Advisory and Chair of the Organising Committee for this Permanent Peoples’ Tribunal Session on Human Rights, Fracking and Climate Change: 'The Tribunal on fracking will assemble a panel of jurists of international repute, to hear arguments from attorneys with expertise in human-rights law, who will call as witnesses, not only scientists and professors, but indigenous and settler people whose lands are being fracked’.

To facilitate the work of this PPT Session on Human Rights, Fracking and Climate Change, fifty submissions have been uploaded, detailing the impacts of the CSG industry on the lives of people across Australia and their environments. The result will be a judicial opinion of far-reaching effect because the PPT is a recognized international, independent, deliberative body with proven competence in human rights law.

The opinion handed down by the Tribunal will be available to use in other settings, to clarify and to affirm the human-rights obligations of States and all stake holders in Civil Society. Importantly the hope is that the result of this PPT session will prove to be a significant step forward, in the on-going struggle to protect the health and wellbeing of the Earth’s inhabitants. It will also highlight the rights of nature, particularly water, since the coal seam aquifers must be de-watered (turning it into a waste product) to access the gas and because the fracking process uses vast quantities of water polluted by chemicals, to flush the gas out of the coal seams.

Our hope and prayer is that the outcome of this PPT session will bring about the urgently needed changes to the fracking industry and therefore to people’s lives. These changes will need to be facilitated by concerned decision makers within government at State and Federal levels.