The first profession ceremony of Delia Callomamani A. and Nidia Huanacuni Q. on July 13, 2002 was marked by its simplicity. Thirty-six Mercys from the Burlingame, Merion and Pittsburgh regions and Institutes beyond came to the Church of Christ our Life in San Martin de Porres, Lima to celebrate with the women and their families. Many took 24 hour bus rides to the ceremony and for several family members, the trip was their first to Lima. The celebration attended by many parishioners and neighbors reflected the several years the two had spent in ministry in the parish. 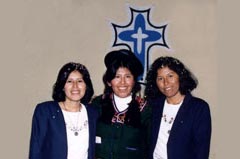 The youth choir Delia has trained sang the Suscipe of Catherine McAuley in Spanish, a very moving moment for the norteamericanos and Peruvians. They followed with songs in Aymara, the women's native language, to the delight of many, including the celebrating priest, Fr Domingo Yanque, an Aymara from Puno.

"The choir's performance was evidence, " said Sr Judy Carle, "that the women had transferred their Aymara culture to the city of Lima."

The women, who follow Sister Carmen Rosa Ccallomamani into the Mercy community, have also matured during their time as inquirers and candidates.

"Their presence is amazing now," said Sr Liz Brennan. "I knew them six years ago as shy women, but they are greatly changed. They talk to a group easily and with great confidence."