Pope Francis Has Endorsed the Catholic Climate Petition- Will You?

Editor: Six representatives (pictured below) of the Global Catholic Climate Movement (GCCM) presented Pope Francis with the GCCM petition to World Leaders following the Holy Father's 7 May Wednesday Audience. News of this endorsement was made public on 14 May. 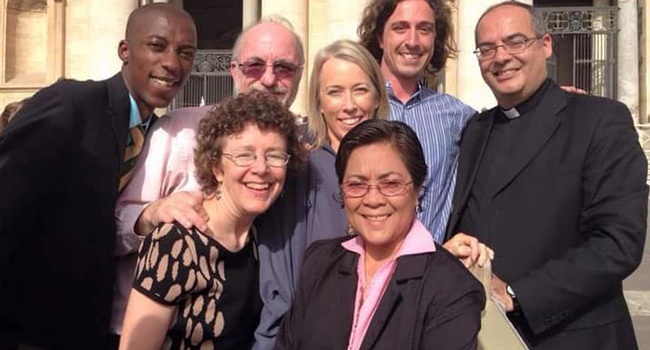 As reported in last week's Mercy eNews, Marianne Comfort, a member of the Institute of the Americas Justice Team, was among this representative group. In preparation for the meeting in Rome, Marianne met online and via email with the MIA Working Party on Cosmology and the Environment whose members represent all MIA Mercy congregations and institutes, to seek input into her representation at the meeting.

Since the launch of the GCCM in January this year, we have promoted (through Mercy eNews) this movement of laity, religious and clergy, theologians, scientists and activists who have joined forces to work together on climate issues.

We invite you to add your signature to the GCCM petition—and thus your voice—in demand of bold climate action, if you haven't done so already. With World Environment Day only a week away (5 June), this is one way to have an impact on protecting the environment.

The petition signatures will be presented to world leaders in December 2015, when they will meet in Paris (30/11- 11/12) at  the UN Climate Change Conference (COP21). The stakes are high - 'a universal, legally binding agreement that will enable us to combat climate change effectively and boost the transition towards resilient, low-carbon societies and economies.'

Once more, Mercy will be strongly represented in person. Let your voice be heard there too.