Presentation on the Millennium Development Goals

On October 26-27, 2006, Sister Deirdre Mullan, Director of Mercy Global Concern at the United Nations, gave two sessions on the Millennium Development Goals, in St. John's, NL, at the invitation of the Committee for Ecology and Justice. The sessions opened with a beautiful ritual that included song, Scripture, prayer and the presentation and display of the eight Millennium Goals.

In the first reflection, "Watered in Tears". Deirdre reminded her listeners of the stunning scientific and technical progress that has marked the past century and continued on to say that this scientific and military progress has not been accompanied by a comparable moral progress. Taking us on a metaphorical journey, she analyzed the effects of globalization and the role of the Sisters of Mercy in challenging its brutal side and posed the following question for consideration "Who are we as Sisters of Mercy in the 21st century?" 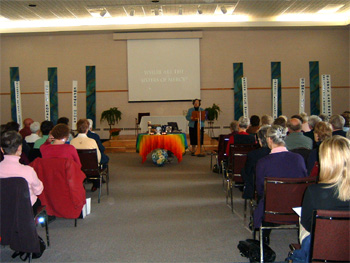 Using the theme of the world as a global village, in the second reflection she challenged her listeners to ask "Where are the Sisters of Mercy in this village?" Citing the three degrees of poverty (extreme, moderate, relative), she noted that the most difficult step for the poor is to get on the first foothold of the ladder toward development. The challenge for us is how to get those living in extreme poverty up on the first rung of the ladder. "How are we, worldwide sisters of Mercy, engaging in this challenge?" She explained that there exists a bold set of statements which offer the best opportunities to end extreme poverty - the Millennium Development Goals. She challenged us not to underestimate the power of one in this process, reminding us of our own example of Sister Francis Creedon who, alone, through her dedication, courage and perseverance, kept the Newfoundland mission alive following the death of her only companion in 1847.

The third reflection centered on "Mercy in a World at Risk" where Deirdre examined how we as Sisters of Mercy bring the Mercy charism to the world platform at the level of the United Nations. She noted that this gives us opportunities to recognize unity in the diversity, to strengthen our global consciousness and global sensitivities and to engage in advocacy, dialogue, empowerment, and partnering on the local, national and international levels. 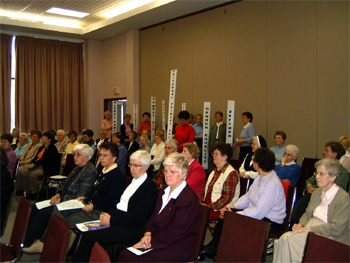 Deirdre brought each session to a close by using the Biblical image of the Visitation that offers us a lens through which contemporary movements in Mercy might be viewed since Mary, the faithful disciple, carried a message of hope and liberation to her cousin, Elizabeth and to all men and women throughout the ages. So too, each of us is called to go in haste to announce the good news to all and to proclaim liberty to each other and to all people held captive by hunger, poverty and injustice. She noted that Visitation spirituality is characterized by the following elements - primacy of the human person, mutuality and interdependence, global awareness and openness to difference.

We are most grateful to Deirdre for engaging us in these reflections and to members of the Committee on Ecology and Justice for their efforts in making these sessions possible.