Reflections on the 2006 High Level Meeting on AIDS

This week while attending the “2006 High Level Meeting on AIDS” at the General Assembly, United Nations, New York, I felt that I was really a member of the world. Being a part of such a varied group of people with very different attire and accents made the globe come alive for me. The NGO’s reporting about the HIV/AIDS pandemic in far away lands were breathing right next to me. The world became small. Later all the speakers would return to their faraway lands, to their people living and suffering amid HIV/AIDS, but now I am connected with them in a deeper way. 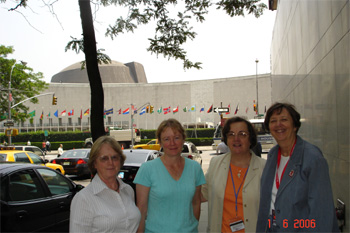 (left-right)
Clare Pierson rsm NZ, Kathy Lynch rsm both of whom were attending the Economics workshop offered by Religious Orders Partnership, Deirdre Mullan rsm Director MGC and Eileen Hogan rsm, both of whom attended the High Level Review on HIV/AIDS

Listening to the NGO’s at the UN assured me that the All-Africa Conference: Sister to Sister is right on target as we focus upon the task of empowering women Religious in the sub-Sahara facing the HIV/AIDS pandemic. The NGO’S spoke persuasively about the very same needs that local African Sisters are confronting within the AACSS – a powerful affirmation.

Editor: Reports from the High Level Review on HIV/AIDS have been posted in the MGC section of the website