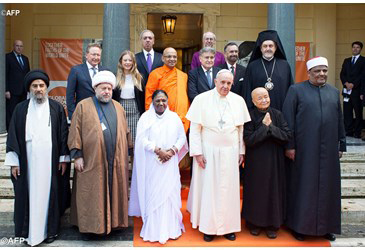 At 11 o’clock on 2 December, International Day for the Abolition of Slavery, during a ceremony held at the headquarters of the Pontifical Academy of Sciences, 12 Religious leaders signed the Declaration ' to eradicate modern slavery across the world by 2020 and for all time'.

'We declare, in the name of each and all of our Creeds, that modern slavery, in terms of traffic of persons, forced labor, prostitution, exploitation of organs, is a crime against humanity.'

This solemn ceremony follows the agreement signed on 17 March in the Vatican, which instituted the Global Freedom Network, to uproot modern forms of slavery and the trafficking of human persons.

Pope Francis joined Anglican, Orthodox, Jewish, Shia and Sunni Muslim, Hindu and Buddhist representatives in signing the Declaration. This gathering of religious leaders represents around 90 percent of the world’s population and commits the communities they represent to working together 'for the freedom of all those who are enslaved and trafficked so that their future may be restored'.