Remembering and Giving Thanks for her Contribution to MIC: Mary Quinn rsm RIP (ISMAPNG)

Of Sr Mary's contribution to the establishment of Mercy International Centre, Mary Trainer rsm (Americas), Facilitator of the Vision, has written this week: 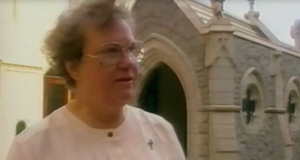 'Mary endeared herself to the Baggot St. Community becoming 'one of them' during the time she lived there. She took time to get to know them and would have rituals that made each one feel special eg. Cecily and she would have a little glass of port occasionally. She had a tender spot for the 'oldies' ...they knew she cared.

All the while she coordinated the work of the task forces in Ireland and around the world who were following up on the dreams elicited in 1989,and working out a proposal for how Mercy World Centre might become a place of heritage, pilgrimage and renewal.

The local ministry proposal and the International Justice Desk were addressed by the local Irish task force on ministry.

In December 1990 Mary presented to the International Steering Committee the finished proposal which also included the architects renderings. Mary worked closely with Sr. Patricia March (Newfoundland), Sr. Canice Hanrahan (Ireland) and myself in the selection of the architect and working with them in specifying space use to carry out the plans being generated by the task forces. It was a tremendous task to integrate the hopes of the Sisters world-wide ...and translate the dreams into building and program design. Mary enjoyed the work and felt honored to be part of making Catherine McAuley better known and loved. She had Catherine's heart for the poor and communicated with a passion our Mission in the world today.

For me personally she was of inestimable support - as we navigated the challenges together. If I were asked
How did we move from hope filled dreams shared at Pentecost 1989 to a full fledged Proposal in Dec 1990...to a consensus to move as Mercy International Center in Spring 1992 - I would answer : It all began with two; Sr. Mary Quinn and I.

Sr Mary Quinn was interviewed for the 1994 video of the Opening of Baggot Street. The clip of her interview is below (00: 41)

Mary Quinn rsm at Baggot Street (1994) from MercyWorld on Vimeo.