Within a few years of its founding in 1994, Mercy International Association (MIA) established an office at United Nations headquarters in New York to amplify the voices of its country-level work and to contribute to advocacy in a UN setting.

HISTORY (How has MIA’s work at the UN unfolded?)

In 1988 the American Mercy Federation had received Department of Public Information (DPI) status at the UN; ten years later, in 1998, the Sisters of Mercy of the Americas successfully gained Special Consultative Status with ECOSOC. That same year, set in motion by a formal request from the Mercy International Justice Core Group, the UN desk of Sisters of Mercy of the Americas became MIA’s UN office, known as the “Mercy UN Mission.”

This shift enabled MIA to engage formally as an NGO in UN policy processes and meetings in New York and worldwide, and to facilitate the presence of Mercy sisters from around the world at the global level. At its founding, MIA’s UN office was co-directed by Wendy Flannery rsm (Australia) and Dale Jarvis rsm (USA).

The Purpose and Mission statement of the Mercy UN Mission indicated its “desire to use our collective power as an international network to exercise global responsibility through formal engagement with the United Nations”; its “commitment to contributing our insights and values […] towards building a global community based on justice, compassion, and mutual respect, and living in harmonious relationship with earth”; and its “passion to bring into focus in the international arena the circumstances and rights of those must vulnerable and disadvantaged […] and to work for change through the United Nations system.” In 1999, the office became known as Mercy Global Concern (MGC); since then, it has served as a channel through which all those associated with the Mercy spirit, vision, and mission in the tradition of Catherine McAuley can be effectively connected with the United Nations.

Deirdre Mullan rsm (Ireland) took over for Dale Jarvis in 2001 as Associate Director, and began her tenure as leader of the MGC the following year. In the early 2000s, MGC position at the UN was enhanced through constituting an Advisory Board (May 2002) to enable stronger links between the views and concerns of Mercy’s membership in its 44 countries with the advocacy work at the global level.

Further developments took place in 2011. MGC was renamed Mercy Global Action and integrated into the new structure of Mercy Global Action (MGA), coordinated by the MGA Director in Dublin (Denise Boyle, fmdm, who took over in 2014 for Mary Purcell). Over the past decade, the structure of Mercy’s work at the UN has solidified into one coordinator – now Áine O’Connor rsm (USA), who took over in 2011 – along with significant support from volunteers and interns, and the frequent presence and contributions of Mercy members.

ACTIVITIES (What does MIA do at the UN?)

From the beginning of its work at the UN, MIA has focused on social justice and poverty eradication, seeking to shift both local and global political, socioeconomic, ecological, and cultural systems that cause and perpetuate poverty, climate and environmental degradation, inequality, injustice, and conflict. In its early years, MGC established its focus on social development, drafting interventions, engaging with specific Members States on advocacy issues, and participating in organizing around annual meetings at the UN: the Commission on Social Development, the Commission on the Status of Women, the Commission for Sustainable Development (which concluded in 2012), the Permanent Forum on Indigenous Issues, and High-Level Dialogues of ECOSOC. MGC facilitated the participation of university students and Mercy membership at these meetings, contributing to capacity building and collaborative advocacy. MIA’s office at the UN has consistently contributed to these substantive UN commissions and the work of UN agencies.

To foster effective engagement at the UN level and to further progress on Mercy concerns, MIA’s UN office collaborates on advocacy strategies with groups of likeminded civil society organizations (including the NGO Committee on Social Development and the NGO Committee to Stop Trafficking). Over the years, MIA’s UN office has been part of the Religious at the UN (RUN) group of UN representatives of religious congregations with DPI and ECOSOC status at the UN. RUN provides an active support, reflection and collaborative space for congregations who minister at the UN. Mercy Global Action, under Áine O’Connor’s leadership, convenes the NGO Mining Working Group at the UN, a coalition of primarily faith-based organizations that works to promote human and environmental rights as related to extractive industries and sustainable development. 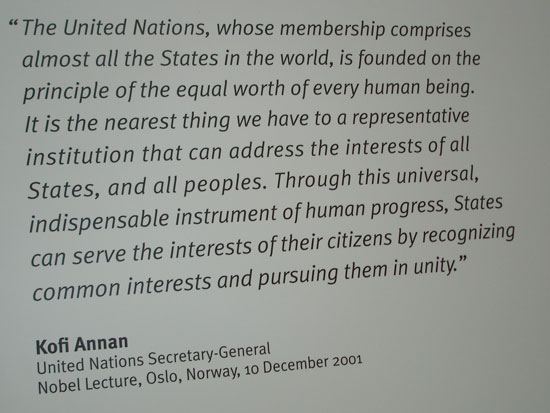 From 2005 to 2009, the MGC held an annual conference called “Bridging the Gap Between Policy and Practice,” at the Church Centre for the United Nations. Since 2012, the MGA office at the UN has held Mercy Justice Advocacy workshops and trainings for members and university students, to build capacity among members of the Mercy network for theologically grounded, strategic, and effective advocacy in national and international arenas on MGA’s focus issues.

Throughout its existence, the UN office has also promoted awareness-raising and education through publications, updates posted on the Mercy World website, and capacity-building of membership. Well read MGC publications include: Water is Free Beverage; Meeting the Global Citizen in You; Leaven for Good in a Hurting World; and, Mercy UN’s most recent collaborative publication with the Mining Working Group: A Rights-Based Approach to Resource Extraction in the Pursuit of Sustainable Development Advocacy Brief.

The Conference on Sustainable Development, known as “Rio+20,” ushered in the current era of MIA’s UN engagement, which is primarily focused on 1) sustainable development and poverty eradication, with particular focus on extractives, water, and the rights of nature; and 2) ending human trafficking.

Mercy Global Action at the UN, through its collaboration with MGA’s Working Groups and the Mercy Global Action Network, and its involvement with the Mining Working Group, has taken an active role in both Rio+20 and its follow-up processes. On its own and through its involvement with the Mining Working Group, MGA has particularly focused on directing statements and advocacy towards Open Working Group (OWG) on Sustainable Development Goals, the intergovernmental body tasked to propose the core elements of the UN’s global development agenda to replace the Millennium Development Goals when they expire in 2015. MGA makes oral interventions at OWG meetings, facilitates and collaborates on written statements, meets with key government and UN representatives, and organizes side events at UN meetings related to MIA’s objectives. Since 2012, the MGA UN office has begun to use the UN human rights mechanisms to advance Mercy’s global justice agenda. Written and oral interventions on human trafficking and mining abuse have been presented at Human Rights Council meetings and the Offices of Special Mandate Holders, in conjunction with UN NGO working group and committee members.

Throughout all of this work, MIA brings the grassroots experience of its members to bear on the decision-making and policy agenda of the global community. Given the responsibility and privilege afforded by its ECOSOC status, MGA is conscious of its role in representing and expressing the experience and criticisms of its members. Through this UN advocacy and engagement, MIA consistently promotes Mercy’s visions and objectives through a human rights-based approach to addressing concerns of global justice and working to restore and promote just, harmonious relationships within and among human societies and the entire Earth community.