Although the weather in Dublin, Ireland had taken a turn for the worse, it did not deter Sisters of Mercy, Associates and Friends of Mercy who gathered at Baggot Street on Tuesday November 11th 2014, to celebrate the life and death of Catherine McAuley. Sisters from all provinces of Ireland, Australia and America were present on this very special day in the Mercy year.

Mary Reynolds rsm, Executive Director of Mercy International, welcomed everyone to Catherine's home, as she remembered the foundress, and asked those present to keep in their thoughts all those Sisters of Mercy and loved ones who have passed before us.

Mass was celebrated by Fr Noel Barber SJ, a long-time friend of the Sisters of Mercy. The first reading – from Angela Bolster on Catherine's Gifts to the Sisters - was proclaimed by Mary Ryan rsm, while the second reading – 1 Cor 13: 1-7 – was read by Johanna Walsh rsm. The Gospel was Luke 10: 30 – 37.

Mary Conway rsm broke open the Word. Sr Mary spoke of a one-man play by the actor Simon Callow that she heard of recently. The play depicts a number of episodes from the life of Jesus such as the raising of Lazarus, the wedding feast at Cana and the journey into Jerusalem. Callow takes on the persona of the different characters in each story and tries to portray their responses and reactions as if it were the first time. He plays all these characters himself inviting the audience to enter into these stories afresh as if they were happening now.

Having heard an interview with Simon Callow, Sr Mary explained that she began to wonder what life was like for Catherine's first companions - those who followed her, listened to her, spent their days with her, and began doing the things that she was doing. She asked what messages would they have picked up from her first hand and by osmosis and passed on so that now years later we choose to live our lives in the light of the same values. 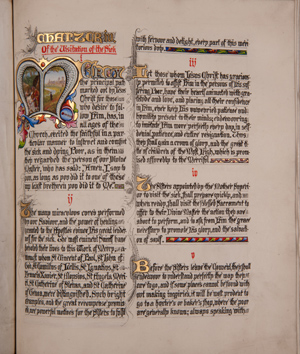 Sr Mary concluded by asking the congregation to hear afresh Catherine's invitation to be women of passion and compassion with a deep love for the neighbour whoever the neighbour may be. Sr Mary reminded those gathered that the calling is to be women of understanding, of quiet confidence and strength; to embody the gifts of Catherine’s heart - gifts of love, sympathy, tolerance and forgiveness; to embody the gifts of Catherine’s mind and of her spirit - gifts of ideals, principles and of purposes, gifts of prayer, peace and a strengthening of faith, hope and charity.

The Chapel was filled with beautiful music by Eithne Doyle rsm on organ and Ailish O’Brien rsm on violin, while the congregational singing was lead by Catherine Dooley rsm.

As the Mass drew to a close, those gathered were left delighted by a story from Claire Setright rsm, who had brought with her a very special gift for Mercy International Association – a basin that had belonged to Catherine McAuley!

Sr Claire had been gifted the basin from a friend, Maureen Windsor, who told her that it had been used by Catherine for making bread in the convent in Baggot Street. Catherine offered the basin to her neighbour, a butcher called Mr Dunne, to make black pudding. The basin had been passed down through Mr Dunne’s family, and it was his granddaughter, Mrs MacMeany, who gave it to Maureen Windsor whom she got to know in the 1980s. Mrs Windsor then decided it should be given back to the care of the Sisters of Mercy, given its sentimental value. The basin will be put on display in the Heritage Room in Baggot Street.

Following the Eucharist, those present enjoyed lunch together in the dining room which provided a lovely opportunity for everyone to share their news.