Report on Papal Visit to the Philippines

Report on the Holy Father's Visit to the Philippines particularly in our area devastated by Typhoon Haiyan/Yolanda on 8 November, 2013. 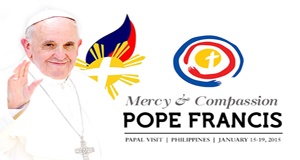 Luis Antonio Cardinal Tagle, Archbishop of Manila led the Filipino people to welcome His Holiness Pope Francis to the Philippines on 15 January, 2015. Archbishop John F. Du, Archbishop of Palo led the victims of Typhoon Haiyan/Yolanda to welcome the Holy Father in the midst of stormy weather in Tacloban City and Palo who were all garbed in raincoats in the airport's open field for the Mass.

The weather was so bad that after the Mass a very strong wind toppled the structure at the altar, hitting a 27-year old CRS lady-volunteer on the nape of the neck, instantly killing her. It was quite sad. Indeed, the faith of the huge congregation eagerly awaiting Pope Francis was so challenged.

The Pope had to wrap himself with a raincoat while celebrating the Mass. Almost all those at the airport, including our able Sisters, had to walk a good distance to the airport the night before so they can be one with the well-wishers.

The Holy Father's messages were so inspiring. He said, 'Filipinos are called to be outstanding missionaries of faith in Asia. Being the foremost Catholic country in Asia is in itself a special gift of God, a blessing.' 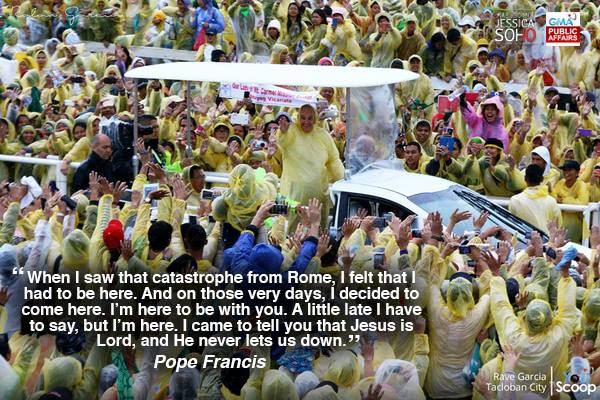 The 78-year-old pontiff is surprised with his strength to do "so much". Even if he would feel spent, he stands up when he sees a crowd waving their hands to greet him. He would say, "They have been waiting for me, why deprive them of this opportunity?". Everyone seeing him approach a sick person, a child, a surprised visit to street children was so touched with great blessings bestowed on them.

A few of our Sisters were so lucky to get near him as reader at Mass, as closeup spectator and as one of those blessed with rosary beads & other holy pictures/images in their hands. His visit truly brought a deepening of faith.

Please God, wherever he goes he brings hope, courage & strength needed in life especially among the suffering poor.

View  the video of Pope Francis' uplifting message to the victims and survivors of the Typhoon Yolanda here (14:58)