Report on the ‘Meeting the Challenge of Climate Justice: From Evidence to Action’ Conference

Many members of the Mercy Family participated in this excellent international conference that was co-hosted by Maynooth University; Trocaire; and St. Patrick’s College Maynooth. A number of speakers reminded us that 2015 is a critical year in addressing the impending climate emergency and charting a path towards a more sustainable future. The year will culminate in the UN Summit (COP21) in Paris, in December. 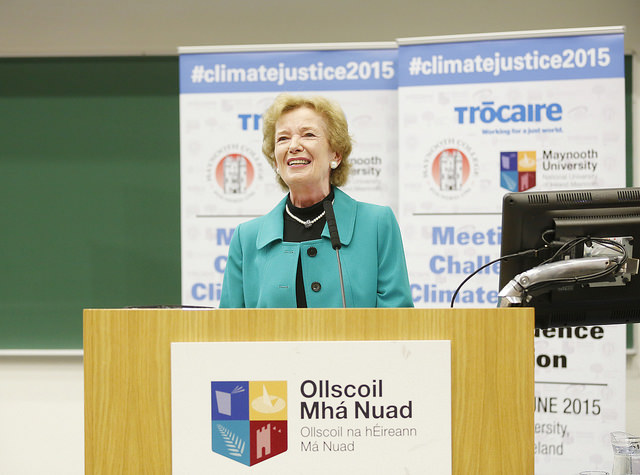 Throughout the conference the 300 plus participants engaged with leading proponents of climate justice and climate activism. The timing, so close to the launch of Pope Francis’ Encyclical, ‘Laudato Si’ brought an added energy and urgency to our discussions, in terms of committing to concrete action, both personally and collectively.

The fundamental tenet of the conference was that climate change, confirmed by scientific data, is the most serious challenge facing humanity today! All the speakers, scientists, activists and theologians spoke of the urgency of immediate action to ‘limit the life-threatening damage’ caused by climate change. Professor Jean-Pascal van Ypersele, Vice-Chair of the IPCC (Inter-Governmental Panel on Climate Change) shared that the increase in carbon dioxide, in our generation, is unprecedented in the last 800,000 years! He said that we have no moral choice but to reverse this trend by taking immediate action.

In this context everyone is looking to the upcoming, critically important COP21 meeting. It is the last ditch attempt for the global community to agree to a legally binding, universally agreed climate treaty that every Government will endorse.

Mary Robinson, Ban Ki-moon’s Special Envoy on Climate Change and former President of Ireland, in her keynote address stated that scientific evidence proves Climate Change is the result of human activity! She spoke passionately to a point made by Pope Francis in his Encyclical, ‘Laudato Si’ – which she referred to several times - that it is the poorest and most vulnerable, who are suffering the worst consequences of climate change. Extensive flooding, severe storms and hurricanes plus extensive drought are a reflection of the rapacious greed and exploitation of Mother Earth by the affluent nations. The Earth is being ‘raped’, to guarantee the enormous amounts of energy required, to sustain the life-style of the majority of the population in rich countries.

Mary Robinson spoke about the ‘inter-generational’ element to the climate change issue. She believes ‘we borrow our world from our ancestors, to hand it on to the next generation’. To endorse this claim, we heard the voices of three articulate youngsters who through poetry, a personal story and a clarion call for action, challenged us to ‘hear the cry of their generation’. Each of these young people wants to grow up in a world where they can still experience and enjoy ‘the beauty of nature including the animals, like the polar bear that are threatened with extinction now!’ They echoed the words of Pope Francis who said: each of us needs ‘To live differently and to eat differently’....

Professor John Sweeney, a noted Irish climatologist, strongly believes that the injustice of climate change experienced by poorer nations cannot be redressed through carbon trading. The only answer is to reduce carbon emissions through collective global action. Excess carbon is the cause of the inordinate rise in global temperature. If our world is to survive this crisis, we have to limit global temperature to a maximum rise of 1.5 degrees Celsius. In an interesting analogy, he suggested we imagine what it would feel like if our body temperature rose by 1.5-2 degrees Celsius. Doing this would help us begin to understand the severity of the global problem!

Fr. Sean McDonagh, Columban Missionary Priest and anthropologist, who provided information to Pope Francis for ‘Laudato Si’, spoke about the critical issue of ‘biodiversity’. He shared that we are in the ‘sixth largest extinction period now’, with a rapid and irreversible extinction of countless species, both fauna and flora! Sean believes that the beauty of the world around us gives rise to creativity, a natural link with our Creator God. If we are looking at a world bereft of beauty, caused by massive climate destruction like extended drought or a hurricane, this tends to destroy creativity, thereby adversely impacting on our relationship with God.

An interesting example of activism was highlighted by Dr. Aine Ryall, an Environmental Lawyer from the Law Department in Cork University. She cited the case, where 900 people in Holland brought their government to court for not taking preventative action to restrict carbon emissions. Through not passing appropriate laws the Government is putting the lives of Dutch people at risk. Dr. Aine also spoke of the importance of inter-connectedness. This is in terms of taking action to address critical elements of climate change, plus a means of keeping informed and updated on the issue.

A personal question arises here. Am I ready to let go of, or at least limit the use of my mobile phone, lap top, fuel driven car, air conditioning etc. that necessitates the mining of much sought after minerals, often from conflict areas like the DRC (Democratic Republic of the Congo)? This personal use of so much energy, together with buying out-of-season vegetables and fruit flown in from all over the world, is contributing to an increase in carbon emissions. In sum, MY lifestyle requires enormous amounts of energy to sustain it! So - what am I prepared to do decrease the energy amount I need?

In this brief overview of what was a most challenging day and a half, it’s not possible to share all that was said and shared. The above serves to illustrate some of the highlights and the challenges posed, during a most enlightening and thought provoking conference.

To conclude, two quotes serve to reinforce what we heard and shared together:
‘At the end of the sixth day God looked at all creation and saw that it was good!’ Gn: 1.25
Mary Robinson finished her keynote address with a quote from ‘The Cure at Troy ’:
‘History says, don’t hope
On this side of the grave.
But then, once in a lifetime
The longed-for tidal wave
Of justice can rise up,
And hope and history rhyme.’
- Seamus Heaney

Our prayer, lobbying and activism throughout the rest of 2015, must focus on making the COP21 meeting in Paris, a moment when ‘hope and history rhyme!’

Editor: Conference materials are available on the Trocaire website where video recordings of the conference will be made available in the coming days.