In July 2011, Mercy International Association introduced its Rio + 20 Roadmap. From that you learned MIA would participate in an important Rio + 20 preparatory meeting: The UN Regional Preparatory Meeting for Latin America and the Caribbean. 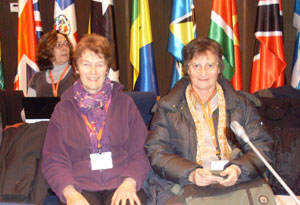 At the September 2011 regional meeting, Ana Siufi, RSM, (CCASA, Sisters of Mercy of the Americas) and Margaret Milne, RSM, (Chile and Sisters of Mercy New Zealand) represented MIA. The purpose of the meeting was to prepare for the United Nations 2012 Earth Summit Conference on Sustainable Development.

Build up to the recent meeting included a sustainable development questionnaire. To obtain Mercy’s grassroots perspective on the progress and gaps in its sustainable development agenda, MIA invited some Sisters and Associates in Latin America and the Caribbean to participate. Responses from regions of Peru, Argentina, Panama and Honduras highlighted particular gaps and opportunities. 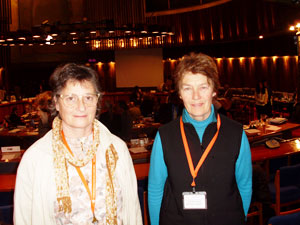 One day prior to the official UN meeting, Srs. Ana and Margaret participated in a workshop to maximize the capacity of major groups (major groups include NGOs, such as MIA at the UN) and other stakeholders to participate fully in the UN Regional Preparatory Meeting. Workshop participants had opportunity to learn more about the themes of the 2012 Earth Summit as well as opportunity to work out various major group position statements to engage Member States at meeting.

Srs. Margaret and Ana reflected on the workshop benefits.

“It was very important to be present at the Capacity Building Meeting in order to discover and understand the dynamic of how the Regional Meeting functions and how best to participate in it,” remarked Sr. Ana. “Not having previous experiences at this level had its own drawbacks and we were aware of our lack of experience. It was necessary to listen carefully, to be alert, and to be able to react quickly when there was an opportunity to speak, to be careful and prepared to take risks.”

“This experience was informative and clearly presented,” said Sr. Margaret. “It reinforced the importance Civil Society has to voice concerns that are deep and outstanding. This voice is a first time opportunity that cannot be taken for granted.”

UN Regional Preparatory Meeting for Latin America and the Caribbean

For two days, government representatives and major group participants from Latin America and the Caribbean explored themes of sustainable development, poverty eradication, the green economy, and the institutional framework for global governance. At the end of the meeting, they formulated their conclusions.

The MIA position brought to the meeting is highlighted as follows:

The limitless growth and production model of development must be abandoned.

Srs. Margaret and Ana offered the following impressions of the meeting.

Meeting participants recognized that although Latin America is rich in natural resources, the gap between the rich and the poor is undeniable. It is this inequality that mandates the need for a new approach to sustainable development. 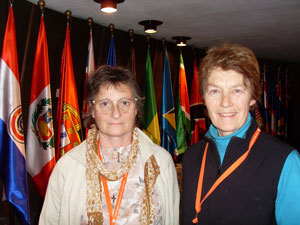 Disagreement and criticism surfaced at the meeting around the term, its meaning and emphasis on the Green Economy. Many present considered Green Economy more a North American term than a South American term. It is noteworthy that the concluding document for the meeting did not mention the term Green Economy. In addition to that debate, participants’ concerns underscored the position that developed countries have a limited notion of sustainable development, relating primarily to economic and commercial pillars, ignoring social and environmental pillars.

In order to give input as a major group at the 2012 UN sessions, good preparations are essential, as major groups are often allotted only 1-2 minutes speaking times during meetings. The informal discussions in the corridors, coffee/tea breaks and bathrooms were also very important. They provided opportunities to communicate with official delegates and civilian groups.

Although MIA was unable to find an opportunity at the meeting to formally raise the issue of mining abuses as an obstacle to sustainable development, it is noteworthy that the official conclusions of the UN preparatory meeting shared several of Mercy’s key sustainable development concerns, including the need to:

It is noteworthy that while the meeting’s concluding document acknowledges the need to reaffirm its “respect for the knowledge and traditional values of the region’s indigenous peoples and local and traditional communities,” it failed to emphasize the responsibility of governments to create forums for this to happen.

To read the Conclusions of the Latin American and Caribbean Regional Meeting Preparatory to the United Nations Conference on Sustainable Development and the interventions by major groups, click here

Finally, in relation to the UN Preparatory Meeting for Latin America and the Caribbean, Srs. Ana and Margaret held that despite the challenges surrounding the 2012 Earth Summit meeting, countries need to prepare themselves with sufficient discussion time for the 2012 Earth Summit agenda. Major groups need to be afforded more time to speak to the agenda of the Earth Summit. Sustainable Development must be for everyone. Peoples should benefit from the outcome.

MIA will be represented at the UN Preparatory Meeting for Europe (ECE) in December 2011. At this meeting, MIA will reinforce the need for the Earth Summit 2012 to reclaim and advance an ethical and inclusive global vision that: