The day began with Morning Prayer which gave all of us here a chance to re-enter the sacred space of the Pilgrimage.

A rousing music session followed and some of the hymns which will be sung at the Pilgrimage Mass on Friday night were practised. There was a fabulous sound as everyone put their hearts and souls into singing and the energy and spirit in the hall soared to great heights.

Adele introduced her session by saying that she would be exploring the broader picture of our connectedness which was a different aspect of our pilgrimage journey. She led the young people in engaging, reflecting and discovering new ways of connecting with each other.

The question we need to ask one another as Mercy people is ‘how can we give a voice to people who don’t have a voice so that they can tell the truth of their story?’ Adele reminded the young people that they have the power, the education and the leadership to do this. She highlighted for them that the unmediated story of the suffering and oppression in the world needs to be told, and that we have the capacity to do that.

Adele then took the young people on a virtual tour of the Mercy International Association website which is available for them to view and use. She illustrated where news can be uploaded and challenged them to visit the site and upload stories of what is important for them. Adele reminded the young people that if enough people use technology for the right reasons and connect together then we can change the world. She invited them to spend some time exploring the site and becoming familiar with the fantastic resources available there. 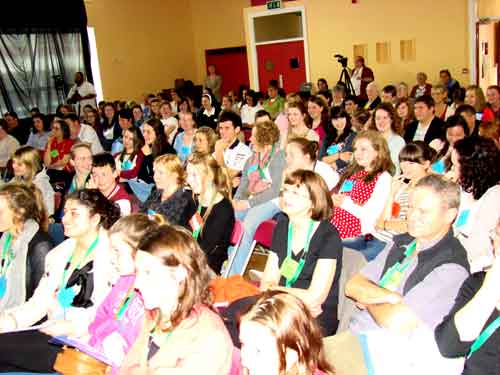 How will we keep in touch and put these ideas into practice? A Question and Answer session followed where all the young people had an opportunity to discuss with one another in groups and then to put questions directly to Adele and to suggest ways of moving forward with telling the stories. Immediately afterwards, many of the young people came to two locations in the hall where they were able to upload their contributions to the MIA Young Mercy Leaders Pilgrimage Facebook page.

Adele invited the young people to link with one another and to write about the issues which are on the website and draw attention to them. There was great energy in the group and everyone left for their breakout sessions in good spirits and full of new ideas.

During the afternoon each participant in the Pilgrimage got the opportunity to participate in a number of breakout sessions.  There was immense variety on offer and every session appealed greatly to those who attended.  The titles of the sessions included:

'Are we human or Are we dancer' led by Lloyd Bracken

'What am I going to do with my one wild and precious life?' led by Dale Jarvis rsm

'The Music of Mercy' - led by Ailish O'Brien rsm

After supper we had  a wonderful play by Lisa Bansavage who, dressed as a Sister of Mercy in the 19th century,  told the story of Frances Warde rsm who founded the Congregation in the United States.

The evening ended with a magnificent talent show in the school hall and everyone left, having enjoyed a wonderful time.